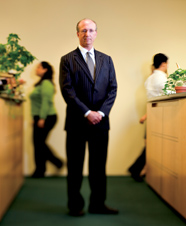 Mayer Brown Rowe & Maw recently asked securitization associates in its New York City office to be at their desks by 10 a.m. Actually, 9:30 a.m. would be even better, says that office’s partner-in-charge, Brian Trust.

According to the request, which took the form of a memo, some partners and, surprisingly, “several associates” were concerned that their colleagues were physically absent during “normal business hours.”

Not so surprising was the reaction the memo got when it ultimately made its way to legal news Web sites and blogs. “When you stop giving us assignments at 6 p.m. that require us to be there until midnight because you’re totally disorganized, we’ll come in at 9 a.m. or whenever you want,” fumed one writer who posted on the Wall Street Journal’s blog. “Other than that, shut your trap, collect your quarterly profits and let us handle our business.”

Trust, a bankruptcy attorney who represents lending syndicates, acknowledges that “if somebody works nights and weekends and needs to rest up, we fully expect that.” Yet he makes no apologies for the firm’s stand on start times.

Management at other law firms has similar thoughts.

“We have normal business hours, and we expect them to be here by 9:30 a.m.,” says Steven J. Gartner, a corporate finance partner at New York City’s Willkie Farr & Gallagher. If an associate is routinely later than that, Gartner says, he would want to know why.

“If they’re just a late riser, we’d tell them that they ought to work harder to get there,” he says. “If we have someone who strolls in around 10:30 a.m. on a regular basis, we’d have a chat with them.” Gartner didn’t elaborate on the nature of the chat, but one assumes it wouldn’t be pleasant.

THE ‘BEING SEEN’ SCENE

Paula Hinton, a litigation partner who mentors many associates at Houston’s Vinson & Elkins, says she often tells them that 99 percent of the job is showing up, preferably on time. “People need to bring home the notion that you have to be here and you have to be seen,” she says.

Needing to see associates at their desks may be generational, says R. Bruce McLean of Washington, D.C., chairman of Akin Gump Strauss Hauer & Feld. When he sees empty offices, he wonders whether the firm has enough work, and he suspects that other lawyers his age have similar thoughts.

But he understands that many associates also work from home, and he says he wouldn’t care if an associate routinely came to work around 11:30 a.m.—providing that person got his or her work done.

“There’s not a high correlation between how much time you spend in the office and how well you perform,” McLean adds. “We probably have some people who are in the office a lot who don’t perform so well.”

Other firms may be coming around to McLean’s views. Steven C. Krane, a commercial litigation partner at New York City’s Proskauer Rose, says he doesn’t care when his associates arrive, as long as they do their work.
Indeed, Krane himself is not even in the office one or two days a week because he sometimes telecommutes. Other partners do get a certain comfort level from seeing associates at their desks, he says, but that could eventually change.

“It may take 20 or 30 years, but at some point we may not have large groupings of lawyers in center city locations,” Krane says. “And it won’t be necessary for firms like mine to have 13 floors in an office tower.”