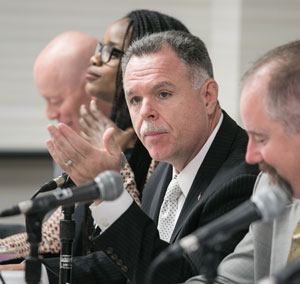 Race and law enforcement got the lion’s share of attention at the 2015 ABA Annual Meeting in Chicago as several sessions discussed aspects of an issue that has taken over national news coverage during the past year.

Tension between police and racial minorities, significantly exacerbated by a series of fatal police shootings in places such as Cincinnati, Baltimore and Ferguson, Missouri, won’t be solved overnight. However, promoting concepts such as procedural justice, transparency and accountability could go a long way toward reducing that tension.

That was one of the main findings from a diverse panel that included law enforcement personnel, academics and community members. Panelists examined some of the root causes of police violence and proposed ways to help solve the long-simmering and historic tension between police and minority communities.

Sponsored by the American Bar Foundation, the panel was moderated by Peggy Davis, chief officer of programs and strategic integration at the Chicago Community Trust. Panelists included Craig Futterman, a professor at the University of Chicago Law School; Garry McCarthy, superintendent of the Chicago Police Department; Tracey Meares, a professor at Yale Law School; Brittany Packnett, executive director of Teach for America for St. Louis; and Sean Smoot, chief legal counsel for the Illinois Police Benevolent and Protective Association.

Meares, McCarthy and Smoot were members of the Executive Session on Policing and Public Safety, a collaboration between Harvard University’s Kennedy School of Government and the National Institute of Justice. The panelists discussed Meares’ report, Rightful Policing, published in February,and focused on promoting procedural justice as a means of fostering greater cooperation between law enforcement agencies and the communities they serve.

Meares said that, based on her research, people care more about being treated fairly by the police than they care about the relative competence of law enforcement personnel.

“Even though the crime rate has declined a great deal over the last 30 years, the public impression of police has remained the same,” Meares said. “Treating people fairly is a crime-fighting strategy. It gives the public important signals and information about what it means to be a citizen in this country.”

The other panelists acknowledged the problem is more complex than simply telling cops to treat everyone fairly. From the police perspective, Smoot emphasized how stressful the job can be, while McCarthy spoke of deep-seated institutional attitudes that can’t be stamped out overnight.

“There must be more urgency,” said Packnett, who served on the Ferguson Commission in Missouri. “Saying that all cops will be training within five years is not good enough. People are dying now.”

Packnett pointed out that, this year alone, there had been 669 people killed by police in the United States as of the day of her speech, and that there had been only 12 days with no fatal police shootings.

Meares challenged the ABA to take on lobbying groups such as the National Rifle Association. “I don’t know what the ABA is doing with regard to lobbying for gun control,” said Meares. “You all need to get on this. You have money and power.”

Another panel focused on the multiple incidents of black Americans dying in police custody this summer, with much of the discussion centering on community involvement in politics and on social media.

“It starts with the policymakers we put in place. Most city councils hire the chief of police,” said panelist Daryl D. Parks, a partner with Parks and Crump in Tallahassee, Florida. The firm represents the family of Trayvon Martin, an unarmed Florida youth shot and killed by private citizen George Zimmerman in 2012. Parks, a past president of the National Bar Association, also represents the family of Michael Brown, a young man shot and killed by a police officer in Ferguson in August 2014.

“It’s Not Just Ferguson: Promoting the Rule of Law and Other Solutions at Home” was sponsored by the Judicial Division and moderated by Judge Bernice B. Donald of the Cincinnati-based 6th U.S. Circuit Court of Appeals.

She mentioned the recent deaths of Sandra Bland and Samuel DuBose, as well as the arrest of Dylann Roof. Roof, who is white, was charged in June with killing nine people at the historic Emanuel African Methodist Episcopal Church in Charleston, South Carolina. Donald noted that Roof told officers after his arrest that he was hungry, and they fed him.

“All of these things have caused us to question our system of justice, and the proportionality of our policies and actions,” she said. “There’s an obligation on each of us to take action and do something.”

Suppose that in 1972, in response to a rising crime rate, President Richard Nixon had announced plans to build 1 million new prison cells, reserve 60 percent of them for blacks and Latinos, and put 3,000 people on death row, proposed Marc Mauer, executive director of the research and advocacy group the Sentencing Project, at a third session.

Such an announcement, which never happened, would have provoked widespread outrage, Mauer said. But the nation’s criminal justice policies over the past 40-some years have had that very effect.

That scenario helped set the stage for a wide-ranging discussion of the nation’s criminal justice and sentencing policies at a showcase program. “Mass Incarceration: A Nation Behind Bars” was sponsored by the Criminal Justice Section.

Mauer said the explosion in the prison population has come about primarily through changes in policy, not crime rates. Sentencing policies adopted in the 1980s and ’90s were designed to send more people to prison and to keep them incarcerated for longer periods of time.

Former Deputy Attorney General James Cole, now a partner in the Washington, D.C., office of Sidley & Austin, said the root of the problem is the expectation that, by taking all criminals off the streets for a long period of time, we would solve the crime problem.

“Crime did go down,” he said, “but we have to ask ourselves at what cost and with what unintended consequences that we now have to live with.”

Requiring on-duty police officers to wear body cameras could drastically reduce misconduct complaints, according to speakers at another panel, because false complaints could be determined quicker, and officers wearing the equipment would be more likely to follow policy.

Earlier, the ABA announced the creation of a task force to analyze the use of body cameras on police officers. The task force, to be led by co-chairs Anthony Holloway, police chief of St. Petersburg, Florida, and Susan Pamerleau, sheriff of Bexar County, Texas, will “undertake a comprehensive legal study to identify best policies and practices for the deployment and use of law enforcement body cameras and assess their impact on the criminal justice system, as well as individual liberties.”

This article originally appeared in the October 2015 issue of the ABA Journal with this headline: “Race and Law: Annual meeting sessions discuss police, sentencing, body cams.”