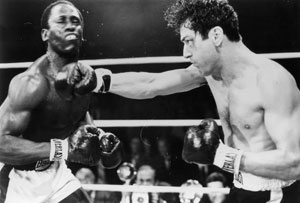 The classic film “Raging Bull” was at the heart of a copyright lawsuit that could deal a knockout blow to patent rights. Getty Images.

What does the 1980 boxing movie Raging Bull have to do with adult diapers? Plenty.

Last year, the U.S. Supreme Court decided Petrella v. Metro-Goldwyn-Mayer, also known as the Raging Bull case because it concerned a copyright in that movie’s screenplay. The court held that the equitable doctrine of laches, which says lawsuits may be dismissed if they were unreasonably delayed, is unavailable in copyright lawsuits.

Paula Petrella, the daughter of the original screenwriter, reached a settlement with MGM this year. But the decision is still being felt—and not only in copyright litigation. On June 19, the U.S. Court of Appeals for the Federal Circuit heard oral arguments in a dispute over whether Petrella applies to patent law. SCA Hygiene Products v. First Quality Baby Products concerns patents on adult diapers, but it could stink up the whole world of patent litigation.

Patent litigators are watching: At least 22 amicus briefs had been filed by mid-June. Mark Privratsky, co-chair of the ABA Intellectual Property Law Section’s subcommittee on inequitable conduct in patent litigation, says a decision that laches is unavailable would be “tipping the apple cart upside down.”

“If the Fed Circuit en banc says Petrella applies,” says Privratsky, a partner at Lindquist & Vennum in Minneapolis, “my analysis is going to be completely different, as is everybody else’s.”

There would still be time limits on damages. Though infringement may have started years ago, plaintiffs can recover damages only for infringement that took place during the past six years, under the Patent Act’s Section 286, which says that “no recovery shall be had” if the lawsuit is filed more than six years after the infringement. But six years of profits from popular software, pharmaceuticals or disposable diapers could be quite lucrative. And that has intellectual property rights holders worried that there’s no end to their liability.

Writing for the majority in Petrella, Justice Ruth Bader Ginsburg reasoned that laches is “essentially gap-filling, not legislation-overriding” —for use when Congress has not spoken. But Congress has created a statute of limitations for copyrights, 17 U.S.C. § 507(b). Furthermore, the court said, laches is an equitable defense that is usually applied to equitable claims; claims for damages are legal.

Petrella expressly declined to take a stance on its applicability to patent law. A footnote acknowledged that the Federal Circuit ruled in 1992’s A.C. Aukerman Co. v. R.L. Chaides Construction Co. that laches can bar patent suits, but added: “We have not had occasion to review the Federal Circuit’s position.”

That occasion may arise soon. SCA Hygiene features a delay of nearly seven years; SCA sent First Quality a letter alleging infringement in 2003, but it didn’t sue until 2010. About half of the delay was caused by an ex parte re-examination of the allegedly infringed patent.

The district court granted summary judgment to First Quality on laches and estoppel, and the Federal Circuit upheld the laches ruling. Though the case was decided after Petrella, the panel said it couldn’t overrule circuit precedent without a clear signal from a higher court. But an en banc panel can, and the court in December agreed to an en banc rehearing in light of Petrella.

The majority’s distinction between law and equity may seem abstract to practitioners who last thought about it in law school. But it matters, says Samuel Bray, who teaches remedies, property and constitutional law at the UCLA School of Law. Though law and equity merged in the procedure of the federal courts in 1938, he says, it wasn’t a complete merger—and remedies are one area where important distinctions remain.

Bray is one of three law professors who joined an amicus brief supporting ending laches for damages claims in patent law. That brief was co-authored by Ariel Lavinbuk, who says the distinction between legal and equitable remedies was established well before the statutes being debated were last revised.

“The Supreme Court has made clear that, while they wouldn’t rule out deviations from the historical rules [distinguishing between law and equity], Congress needs to speak clearly in doing so and you need to look at the background against which it’s legislating,” says Lavinbuk, a partner at Robbins, Russell, Englert, Orseck, Untereiner & Sauber in Washington, D.C. “And that really is the beginning and end of the matter.”

Privratsky is aware of some sources, like a U.S. Patent and Trademark Office manual, that refer to Section 286 as a statute of limitations. But that was before Petrella.

“Prior to Petrella, there wasn’t a lot of thought going into whether 286 was or was not a statute of limitations,” he says.

Lavinbuk doesn’t think it matters under Petrella’s reasoning. What matters is whether Congress has spoken at all, he says, rather than letting courts fill gaps with common law or state statutes. And it did speak with Section 286.

Another argument raised to distinguish Petrella from SCA is the defense of unenforceability in patents. Though legal bases for it are not expressly listed, the Aukerman court said unenforceability includes equitable defenses like laches. Privratsky says this is a standard argument in patent litigation and, indeed, laches is included in the Federal Rules of Civil Procedure’s list of defenses to any claim.

Privratsky, who has represented both plaintiffs and defendants in patent infringement suits, believes it’s better to leave laches available. Otherwise, he says, plaintiffs can intentionally wait until an alleged infringer has invested the time and money to make its business profitable, then swoop in and take the profits.

The three-justice dissent in Petrella, authored by Justice Stephen G. Breyer, made this point. Indeed, the screenwriter’s daughter admitted that she delayed her suit in part because Raging Bull was not profitable in 1991. But the majority said that it’s fine to wait to see “whether litigation is worth the candle,” and that the statute of limitations restricts how far into defendants’ profits a successful plaintiff can reach.

Bray says this is actually another reason to distinguish between legal and equitable remedies.

“[If] the court says the damages you get are a million dollars, you get a million dollars,” he says. “Equitable remedies are more likely to have this change in value over time, and that creates this risk of somebody hanging back to bring the claim and waiting to see if it’s going to be really valuable.”

In copyrights, the decision has already created a rash of lawsuits that are based on decades-old infringements. Among them are claims to the iconic opening guitar riff in Led Zeppelin’s “Stairway to Heaven” and the theme song to CBS’s remake of Hawaii Five-0.

And it’s a nonissue in trademarks, where the Lanham Act expressly includes laches and other equitable principles as defenses. But patents lack that kind of guidance—and that has practitioners watching.

“I think everybody’s coming up with their own opinion,” Privratsky says, “and now we’re all holding our breath waiting for the Federal Circuit to tell us for sure.”

This article originally appeared in the September 2015 issue of the ABA Journal with this headline: “Rude Awakening: Copyright decision could rouse patent holders to sue decades after alleged infringement.”