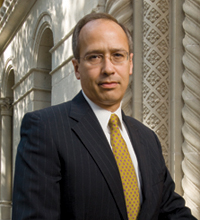 You’re a police officer approaching a car that’s been stopped for a traffic violation. Suddenly, the vehicle lunges into re­verse as you walk up from behind. You have a weapon. Do you shoot?

It’s a typical scenario for police trainees as they watch the scene play out on a simulator. But it’s also a scene that grand jurors in at least two Texas counties enact as they go through the same fire­arms training as police recruits.

“It’s very important, in my view, for the grand jury to hear what a police officer is trained to look for and do in a real-life situation in which he has to make a split-second decision whether to draw and fire his weapon,” says Cliff Herberg, first assistant district attorney for Bexar County, which includes San Antonio.

Herberg says the police training simulator exposes grand jurors to some of the practical re­alities of police work—a valuable experience should such cases come before a grand jury during the term that it sits.

He says he came up with the idea after going through the training himself during a grand juror review of a similar incident several years ago. He presented the idea to his boss, District Attorney Susan Reed, who readily agreed to start taking grand jurors through the firearms training simulator at the San Antonio police academy as part of their initial orientation. The DA’s office also puts new grand jurors through a drug orientation program.

Another Texas prosecutor says he doesn’t include firearms instruction in his grand jury orientation. But he says it strikes him as a good idea.

“I think it would be very helpful, particularly in a large jurisdiction, for the grand jury to have some training and education in the actual use of a firearm,” says Williamson County District Attorney John Bradley.

Bradley says the only reason he doesn’t offer such instruction is because he doesn’t have enough shooting cases coming before the grand jury to justify it.

The experience, says Herberg, includes a half-hour lecture on the use of deadly force followed by a trip through the simulator, where vari­ous “shoot/don’t shoot” scenarios are played out.

The simulator includes a giant video screen and a fake weapon, which makes a loud bang and registers the “shot” electronically when the trigger is pulled. Scenarios include the stopped car, an obviously distraught man in a hospital reaching for his lower back and pulling out a dark object that turns out to be a wallet, and a man coming out onto his porch with a shotgun that he suddenly raises and aims at a neighbor.

Herberg says the program helps dispel some common misperceptions among laypeople, such as that a police officer who finds it necessary to shoot someone is trained only to wound, not kill, the intended target.

But criminal defense lawyers—and some prosecutors—elsewhere say they’ve never heard of anything like it. And critics say the practice not only threatens to taint the grand jury process, but could actually backfire on prosecutors if it leads to the indictment of somebody against whom there is not enough evidence to get a conviction.

New York City lawyer Gerald Lefcourt, a past president of the National Association of Criminal Defense Lawyers, expressed shock and disbelief when he heard about the Texas training. He says there can only be one reason for putting grand jurors through a firearms program.

“I cannot imagine it being done for any purpose other than to influence the grand jury in favor of the police,” he says. Which is particularly unfortunate, Lefcourt and other defense lawyers say, given that grand jury proceedings are already one-sided. As they point out, only the prosecutor’s side is heard; exculpatory evidence is gen­erally not presented; the burden of proof—probable cause—is relatively low. And while a potential defendant may be allowed to testify, he or she typically may not be accompanied by a lawyer.

“It makes grand jurors adjunct cops instead of independent citizens,” Lefcourt says of the practice.

Another NACDL past president, Gerald Goldstein of San Antonio, says he too had no idea that grand jurors in Bexar County are put through a firearms training simulator. And he’s been practicing law there for 35 years.

Goldstein says the idea that prosecutors would engage in a practice designed to “sensitize” grand jurors to the point of view of police officers illustrates one of the hidden dangers of the grand jury, whose proceedings are secret under state law.

The grand jury, he says, was envisioned by the founders as a bulwark against prosecutorial abuse—an impartial panel of ordinary citizens who would examine all the evidence of an alleged crime and protect the individual from unfounded or unwarranted accusations.

If the grand jury isn’t going to operate the way the founders intended it to, he asks, why even have one? And, if it’s OK for prosecutors to sensitize grand jurors to the perils of being a police officer, he adds, shouldn’t the defense be allowed to have them play the video game Grand Theft Auto to help them understand what motivates car thieves? District Attorney Joshua Marquis of Clatsop County, Ore., serves on the governing board of the National District Attorneys Association. He says he doesn’t want to be seen as criticizing another prosecutor’s practices, especially when it comes to something like the grand jury.

But Marquis says he would never put grand jurors through such training during orientation and—until now—didn’t know of any prosecutors who did. “Maybe I’m being overly cautious, but I’d be a little concerned that that might cross over the line between orientation and indoctrination,” he says.

But Herberg says he doesn’t understand what all the fuss is about.

“That’s all important information a grand jury should have when it is con­sidering whether a police shoot­ing is justified or not,” he says.

“And it’s nothing a jury isn’t going to hear anyway if the case ends up going to trial.”