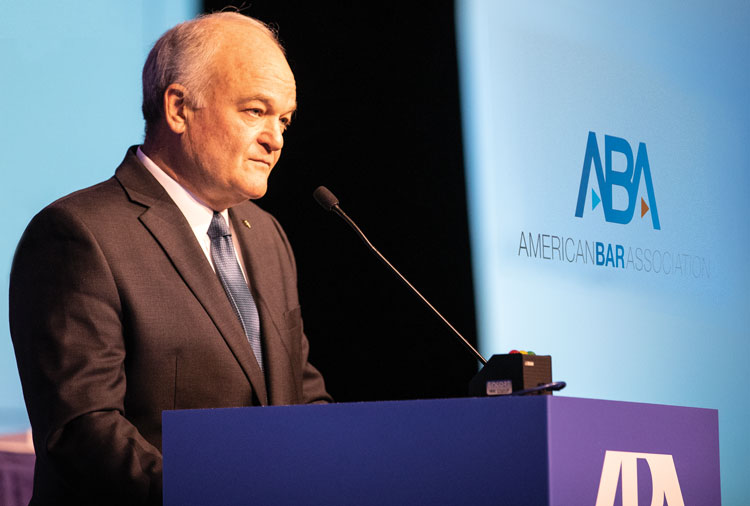 The ABA House of Delegates got a glimpse of the future at the 2019 ABA Midyear Meeting in Las Vegas with a sneak peek of the association’s new branding.

Executive Director Jack L. Rives presented delegates with the new logo design, which had been approved by the Board of Governors the day before. While the current ABA logo has been in use for more than 40 years, a new logo could assist the association in proving its value to both potential and current members, Rives said.

“How do you change an iconic logo?” Rives asked. “Carefully. You don’t need to make it a revolutionary change, you can do it evolutionarily.”

Rives pointed to several issues with the current ABA logo, including that it’s difficult to read and does not place enough emphasis on “bar.”

“Even though we’ve gotten used to it, those in the business say it is not artistically pleasing or designed all that well in the beginning,” Rives said.

The ABA worked with marketing agency Finn Partners, which went through dozens of possibilities before recommending the new logo design. Burkey Belser, managing partner of Finn Partners, told the Board of Governors that his team received a positive response to the new design from four focus groups in various parts of the country.

“It’s contemporary, it pays homage to the past while moving forward to the future, and highlighting the look is the subtle colors that are used,” Rives said. “This was their recommendation, and when you look at the logo that was proposed and compare it with the current logo, you will see how much more powerful the proposed logo is.”

Rives said that the use of the new logo design will coincide with the launch of the new membership model on May 1.

The new membership model is designed to address a decline in dues-paying memberships and revenues, Rives said. Between 2008 and 2018, dues revenue dropped from $86 million to $67 million.

The new membership model will implement a sensible dues structure, said Rives, in part by transitioning from the previous 157 different dues price points to five dues price points by fiscal year 2020. The new dues structure was approved by the House in August during the 2018 ABA Annual Meeting. The ABA will also unveil more member benefits, including personalized content for members and a CLE marketplace that will include 650 courses by early 2020.

We are going to do a lot to improve the member experience,” Rives said. “We are going to make it very apparent that people get a lot more than what they pay for with their ABA dues.”