Replicas and animations can help present a winning case 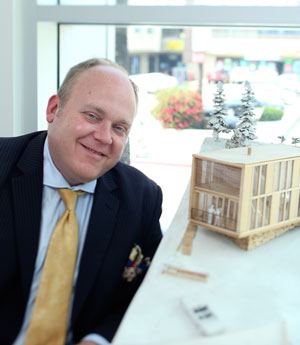 To illustrate a key piece of evidence in an insurance fraud case, model maker Roland Benson was hired to build a life-size replica of the back of a car and the walls of a garage. The case hinged on whether the deceased died accidentally or as a result of suicide.

Benson’s design firm—Benson Design Associates in San Antonio, Texas—requently works with attorneys, and it also builds small-scale models for use as exhibits in a trial. “We once created a miniature version of a real house, like a dollhouse, complete with furniture to show what happened in a theft case,” he says.

Benson’s usual fee for model-making is $150 per hour.

Attorney Mark McBride, who runs a solo criminal defense practice from his office in Beverly Hills, California, makes extensive use of models.

“We get together with the model maker, tell them what’s required, provide the police reports, photographs—whatever’s needed,” McBride says. “The model maker may also go to the scene of the crime.”

Average cost of a model is from $5,000 to $7,000, but it’s worth the money,” says McBride. “They’re always very helpful. Especially now since [Los Angeles] County doesn’t want to pay to take a jury to a crime scene location the way they used to.”

It’s not uncommon for opposing counsel to object to introduction of a model as evidence, McBride says. “They’ll say it’s not to scale or it confuses the jurors. These objections are mostly overruled.”

Scott Andrews, production supervisor at KiwiMill in Fairport, New York, often works with attorneys to create models. Andrews says he must fully understand the point the attorney is trying to make with the model before beginning to create it.

“Beyond that, not only must the jury and judge understand the model, but the attorneys must also understand it,” Andrews says.

As the model is being built, Andrews keeps in touch with his attorney client and sends photographs of the work in progress.

While models are still commonly used in trials and mediation, an emerging trend is the use of animation to replace them, according to attorney Quentin F. Urquhart Jr. of the Louisiana law firm Irwin Fritchie Urquhart & Moore. Urquhart is a past president and member of the International Association of Defense Counsel.

“Animation is now more widely used. It’s economical and easy for a jury to follow,” says Urquhart, who is based in New Orleans. “In a product liability case, … a 3D scan of the machinery is taken and a CAD [computer-assisted design] animation is made, which is highly accurate.

“This is very good, demonstrative evidence.”

“We first visit the site of a traffic accident, for example,” says Nobles. “We take measurements, shoot photos or videos. Sometimes we use a drone to take aerial shots.” After the on-site data is collected, a 3D model is made, and the animation is created from the model.

“We do the animation from the actual product,” he says, “and can then show exploded views or turn it in different directions.” Usually, an expert witness comments on the pictures.

Depending on the work required and the level of pictorial detail, the cost for animation can be $5,000 or more, Nobles says.

McBride found his designer through a recommendation from another attorney. Urquhart found the model maker and animator through an expert witness group that has served as a sponsor of many International Association of Defense Counsel events in the past.

This article originally appeared in the June 2016 issue of the ABA Journal with this headline: “Model Law: Replicas and animations can help present a winning case.”