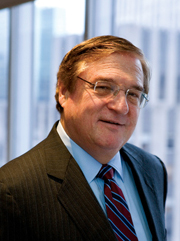 Taken together, this may amount to a movement: In November, Kirkpatrick & Lockhart Preston Gates Ellis dropped a mandatory retirement policy that had forced lawyers out at age 70. In April, Pills­bury Win­throp Shaw Pitt­man announced it was scrapping its mandatory retirement age of 65.

In October, Chicago’s Sid­ley Austin settled an age discrim­ination suit over the demo­tion of 32 partners and agreed with EEOC demands that it not have a mandatory retirement policy. In August, the ABA House of Delegates took a stand against such policies.

“I do think there has been a change,” says Mark H. Al­cott of Paul, Weiss, Rif­kind, Wharton & Garrison. He thinks it’s about time.

While mandatory retirement has been waning in the corporate world, “it remains deeply entrenched in the legal profession,” says Alcott, past president of the New York State Bar Asso­ciation.

As NYSBA president, Alcott made ending mandatory retirement a top priority. In 2006, a committee established to study the issue concluded that no legitimate reason existed for such inflexible policies and that they hurt law firms, as well as the profession. The report noted that mandatory retirement is found in 57 percent of firms with at least 100 lawyers.

In August, the ABA House of Delegates endorsed an NYSBA recommendation that called on law firms to end mandatory age-based retirement. Opponents said the ABA should not dictate how firms should handle what amounts to a private contract matter with partners.

Answered Michael S. Greco, an ABA past president, during the debate: “This is a matter of principle, and principle trumps contracts.”

When K&L Gates said it had eliminated its policy of retiring equity partners at 70, chair Peter Kalis noted that two of the ABA’s last three presidents hailed from the firm, and they wanted to support the ABA resolution.

Kalis added, “Our partners concluded that age-based limi­tations on partner status are anachronistic and out of step with enlightened views of … productive older lawyers.”

In an online commentary in August, Pillsbury Winthrop’s chief human resources officer, Deb­orah Johnson, discussed the firm’s decision to drop its policy of mandatory retirement at age 65. The firm, she said, will create individualized 3- to 5-year plans for senior partners that consider both the partners’ wishes and skills.

Media reports say at least two other major law firms—Dew­ey & LeBoeuf and Cadwala­der Wickersham & Taft—­have also pledged to drop mandatory retirement. Sidley Austin’s recent $27.5 million age discrimination settlement may have also played a role. The firm acknowledged no wrongdoing and accepted 32 former partners as employees for the purpose of ending the legal wrangling, but the resulting decree did not amount to a merit on the findings.

“I think it is too early to say whether the Sidley Aus­tin case is having an immediate impact,” says James Matthews III, an employment lawyer at Fox Rothschild who represents law firms, “but the mere existence of the Sidley Austin litigation has been a cause of concern.”

Managing partners at several large firms declined to discuss whether they were considering an end to man­datory retirement. Half the respondents to a survey of firms by management consultants Altman Weil said they had mandatory retirement, but only 38 percent said they favored enforcing the policy.

“It is going to take some time,” he says. “We’ve called on the profession to think about this issue, to discuss it. I believe that is starting to happen.”