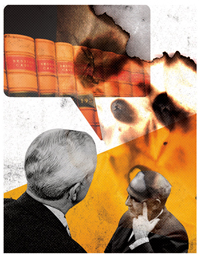 Alzheimer’s disease is not an ailment that announces its presence. It sneaks up, dropping hints of its existence that only become obvious when it is already wreaking havoc in the lives of its victims and their loved ones.

The wife of a solo practitioner in Oklahoma knows that pattern all too well. Her husband, who is in his mid-50s, was recently diagnosed with younger-onset Alzheimer’s. The effect has been devastating, she says.

“It’s surreal—it’s like you’re not really living; you’re watching your spouse become another person,” she says. “I can’t trust anything he says about things he’s known his whole life, like taxes and the law. It’s like every day you’re faced with something he can’t do or remember. It’s like I’ve got somebody else here, not the man I married.”

But looking back, the attorney’s wife realizes that the signs were apparent long before. (She requested that their names not be used to protect their privacy and to avoid compromising any possible legal matters.)

Going through his old e-mails, she says, “I found some from 2004 where he wrote to someone, ‘Call this person and get their phone number.’ It really clicked for me when we were at the dinner table and he said, ‘Pass the thingamajigs,’ instead of salad tongs. That’s a word-finding problem.”

What cut deepest, she says, was an apparent lack of compassion from other attorneys about her husband’s plight. Even after a successful 30-year legal career, other attorneys just didn’t seem to want to give him any breaks during court appearances or other work on cases, she says. Her husband no longer practices because of his medical issues.

This tragic scenario is likely to play out more frequently in the coming years for members of the legal profession. The Alzheimer’s Association estimates in its statistical report for 2010 that 5.3 million Americans have Alzheimer’s disease. While most of those people are 65 or older, some 500,000 Americans younger than 65 suffer from younger-onset Alzheimer’s or other dementias, the association says in its report. And with the first baby boomers due to reach age 65 in 2011, those numbers are bound to go up, the association predicts. The specter of Alzheimer’s and other forms of dementia may be a particular concern for the legal profession because trends suggest that growing numbers of lawyers will remain in practice as they get older.

“There is a widespread concern that a greater percentage of the coming generation of senior lawyers (the baby boomer generation) will remain in active law practice, without adequate support or assistance, beyond the point when their health and abilities indicate professional changes are in order,” states a report (PDF) issued in 2007 by the Joint Committee on Aging Lawyers, created by the National Organization of Bar Counsel and the Association of Professional Responsibility Lawyers.

NOT READY FOR OLD AGE

Current regulatory rules and procedures are not well-suited to protect the dignity of senior lawyers who suffer from age-related changes in their professional abilities, the report says. Nor do they “adequately protect the clients who are likely to suffer adverse consequences when an age-related impairment significantly affects their lawyer’s ability to continue in active law practice.”

The demographics speak for themselves, says John T. Berry, director of the legal division at the Florida Bar in Tallahassee and chair of the joint committee when it issued the report.

“We’ll be dealing more and more with issues of aging,” he says, “both from a positive standpoint of being able to contribute to the profession longer and looking at health issues that affect the ability to practice.”

Some steps are being taken. The ABA Commission on Lawyer Assistance Programs, for instance, has expanded its initial focus on lawyers facing alcohol or drug issues to give more attention to the concerns of lawyers suffering from Alzheimer’s and similar diseases, says commission chair Robert L. Childers, a state district court judge in Memphis, Tenn.

But when it comes to ethics considerations, professional conduct rules generally don’t give much leeway to incapacitated lawyers, regardless of the cause of their impairment. That approach is embodied in two opinions interpreting the ABA Model Rules of Professional Conduct that were issued during 2003 by the association’s Standing Committee on Ethics and Professional Responsibility. (The Model Rules are the direct basis for lawyer conduct rules in every state except California.)

“Impaired lawyers have the same obligations under the Model Rules as other lawyers,” concluded the ethics committee in Formal Opinion 03-429 (June 11, 2003) (PDF) . “Simply stated, mental impairment does not lessen a lawyer’s obligation to provide clients with competent representation.” The opinion notes that Model Rule 1.16 specifically prohibits a lawyer from representing a client if the lawyer’s mental impairment “materially impairs the ability to represent the client.”

When an impaired lawyer is unable or unwilling to deal with the consequences of his impairment, the firm’s partners and the impaired lawyer’s supervisors have an obligation to step in.

If a lawyer continues to practice after his impairment has rendered him unable to represent clients competently, diligently and otherwise as required by the ethics rules, other members of the firm must report the violations under Model Rule 8.3(a) to the appropriate disciplinary authorities.

The bottom line, the opinion emphasizes, is that “the firm’s paramount obligation is to take steps to protect the interests of its clients.”

There is some flexibility in the obligation of an impaired lawyer to withdraw from representing clients, says Marvin L. Karp, a partner at Ulmer & Berne in Cleveland who chaired the ABA ethics committee at the time it issued the opinion. “It doesn’t mean the lawyer has to withdraw completely from the practice,” says Karp, who currently chairs the Ethics and Professionalism Committee in the Senior Lawyers Division. “The afflicted lawyer could be doing research and providing advice, but the firm has a responsibility to make sure the lawyer is not impairing the ability to represent the client.”

Soon after it issued Opinion 03-429, the ethics committee followed up with Formal Opinion 3-431 (Aug. 8, 2003) (PDF), which concludes that the obligation to report a lawyer whose mental condition impairs his ability to rep resent clients extends to attorneys who are not in the same firm as the impaired lawyer.

The opinion notes that a lawyer’s impairment may be caused by senility or dementia, alcoholism, drug addiction, substance abuse, chemical dependency or mental illness, conditions that are best identified by health care professionals. Nonetheless, the opinion states, “a lawyer may not shut his eyes to conduct reflecting generally recognized symptoms of impairment (e.g., patterns of memory lapse or inexplicable behavior not typical of the subject lawyer, such as repeated missed deadlines).”

Though lack of fitness evidences itself through a pattern of conduct, a lawyer’s behavior in social settings should not be the basis for judging his performance in practice settings, says the opinion. “A lawyer must know that the condition is materially impairing the affected lawyer’s representation of clients.”

A lawyer may advise another lawyer’s partners or supervisors if that lawyer’s pattern of behavior raises issues, but there is no affirmative obligation to do so before reporting the lawyer to appropriate authorities. And if client information would be disclosed in making a report, the reporting lawyer must obtain his client’s informed consent.

Of course, the duty to report may conflict head-on with the duty to provide zealous representation to the client. In circumstances such as these, the decision on whether to report another attorney’s impairment may carry with it awkward strategic implications.

“That’s a difficult ethical issue,” says Walter T. Burke, a founding partner of Burke & Casserly in Albany, N.Y., who chairs the Elder Law Committee in the Senior Lawyers Division, “because if it’s something that’s hotly contested, it’s my obligation to the client versus my obligation to the court. If [the afflicted attorney] keeps missing deadlines, the court’s going to explode and the case is going to get tossed. If I open it up to the court, am I doing my client a disservice?”

Michele D. Hangley, a co-chair of the Ethics and Professionalism Committee in the Section of Litigation, says there are times when a client’s interests must be balanced with other considerations. “There comes a point where you have a different obligation to the court and the system,” says Hangley, a shareholder at Hangley Aronchick Segal & Pudlin in Philadelphia. “It isn’t ethical to watch a lawyer’s mental capacity go down the tubes and take advantage of that.”

Berry says bar associations need to pay more attention to issues relating to lawyer impairment. “We need to get ahead of the curve,” he says. “We’re going to have more lawyers practicing at an advanced age. We need to do a better job to help lawyers with these transitions.”