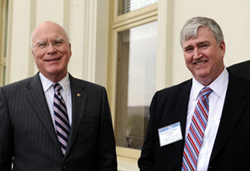 For many bar leaders, ABA day in Washington has become a spring tradition in which they join some 300 colleagues from around the United States on Capitol Hill for face-to-face meetings with their senators and representatives to seek support for legislation important to the justice system. And every year, the veterans are joined by newcomers to the ABA’s largest single lobbying effort.

But whether regulars or rookies, ABA Day participants emphasize the importance of the chance to make a direct pitch to legislators.

“There is no substitute for the personal contact of sitting down with members and staff for a few minutes to let them know why the issues are important,” says William K. Weisenberg, an ABA Day veteran and member of the event’s planning committee. He also is assistant executive director of public affairs and government at the Ohio State Bar Association in Columbus.

“Not only were the meetings productive—they were fun,” says Richard T. Cassidy, a founding partner at Hoff Curtis in Burlington, Vt., and another ABA Day veteran. Cassidy says a high point for the Vermont delegation was a tour of the Capitol’s nooks and crannies conducted by one of the state’s senators, Democrat Patrick J. Leahy, who chairs the Senate Judiciary Committee.

Laurel G. Bellows, the ABA Day Planning Committee chair, told bar leaders, “Your participation in this important grassroots lobbying effort ensures that critical information on the threat to equal access to justice is presented to Congress by the organized bar, the nation’s strongest advocate for adequate funding and resources essential to preserve our justice system.” She is a principal at the Bellows Law Group in Chicago.

Co-sponsors of the 14th ABA Day, held April 20-22, were the National Conference of Bar Presidents, the National Association of Bar Executives, and the ABA’s Section Officers Conference and Young Lawyers Division. The Standing Committee on Governmental Affairs, chaired by Bill Robinson of Florence, Ky., also played a pivotal role in planning the event. Robinson is member-in-charge of the northern Kentucky offices of Frost Brown Todd and the ABA president-elect nominee.

Participants focused on three key issues in meetings with legislators:

• Legal Services Corp. The Civil Access to Justice Act pending in Congress would reauthorize the LSC for the first time since 1981, increase its authorized annual appropriation to $750 million, and implement other changes to improve its governance, operations and accountability. The ABA is recommending that the corporation’s appropriation for the upcoming budget year that starts Oct. 1 increase from $420 million to $440 million.

• Civil Rights Tax Relief Act. Victims of discrimination are penalized by current tax laws requiring them to pay taxes on settlements and awards of noneconomic damages, and to pay taxes at one time on income awards that might cover many years. The proposed legislation would exclude noneconomic damages from taxable income and allow income averaging for income awards covering multiple years that are paid in a lump sum.

• Paycheck Fairness Act. This bill, already passed by the House, would strengthen the Equal Pay Act of 1963 to bring about gender equity in salaries.