Some criminals can’t help taking ineptitude to the next level 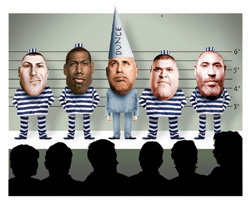 It’s not a crime to be an idiot. Which is actually a good thing because with prisons already over capacity, there’s no room for thousands more. Politicians alone would overtax the system (pun intended).

But idiots and crime have always been a natural—if sometimes dangerous—combination, and occasionally the crimes rise above the level of mere misdemeanor. In those cases, we have a whole other category: felony stupid.

It’s a term that’s been around a while—for example, as part of the colorful collection of cop slang—but is lately being bandied about among court personnel, pundits and law enforcement officials.

Some use the term to refer to people such as O.J. Simpson, who—against mighty odds—beat a murder rap in 1995 and kept his freedom. But instead of fading away and living out his life quietly, he was found guilty of armed robbery and kidnapping in 2008 and received a sentence of nine to 33 years. But more often felony stupid is used when referring to criminals who are such nitwits, they practically hand themselves over to authorities with a big bow around their necks. To paraphrase comedian Jeff Foxworthy and his popular “You might be a redneck if …” one-liners: “You might be felony stupid if, as a prank, you point a toy gun in the face of a police officer.”

Last Halloween, 29-year-old Patricio Preciado pulled such a stunt. Standing in a breezeway on Main Street in Grand Junction, Colo., he pointed a gun at officer Cody Kennedy and said, “Give me your money.” As Kennedy drew his service revolver, Preciado reportedly said, “I’m just kidding. It’s a toy gun.”

Kennedy failed to see the humor, informing Preciado that he had very nearly been shot. Preciado, who has four prior felony convictions, was taken to Mesa County jail, where his bond was set at $10,000. He was later charged with attempted robbery and felony menacing.

And you might be felony stupid if you invade someone’s home and decide to stick around when you realize a SWAT team has shown up.

Four armed suspects broke into a home in the Lincoln Heights neighborhood of LA in December, according to the Los Angeles Times. The resident called 911. As police arrived, two of the suspects fled, which seems like the best move in that situation. The other two, however, stayed and told the man to tell the cops they were residents of the house and victims, too.

Just to make it more convincing, they told the man to tie them up, which, one assumes, he was only too happy to do. He then went outside and told the cops where to find them, already gift-wrapped. LAPD Officer Norma Eisenman had this take on the bumbling burglars: “That’s what you call felony stupid.”

And that’s what you call Darwinism hard at work, clearing out the shallow end of the gene pool. In some cases, maybe it is a crime to be an idiot.