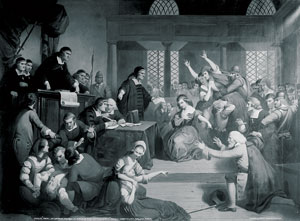 In May 1692, only nine days after arriving in Boston, the newly appointed governor of the Massachusetts Bay Colony, William Phips, commissioned a court of oyer and terminer to adjudicate accusations of witchcraft sweeping through Salem Village and other nearby towns. The rash of accusations, not unknown in New England's Puritan villages, had begun in February when two young girls showed signs of what was believed to be demonic possession. But by the time of Phips' arrival, village jails were swelling with men and women arrested on charges of witchcraft.

Phips, an adventurer and treasure hunter, had gained his office through a close relationship with Increase Mather, a Puritan minister whose influence helped gain a measure of home rule from the British monarchs William and Mary for vast parts of New England and eastern Canada.

But Mather’s influence was also theological. Renowned for his Manichean belief in good and evil, Mather had written extensively on the nature and menace of the occult. In 1689, Mather’s son, Cotton, wrote Memorable Providences, a popular book detailing the alleged possession and redemption of Martha Goodwin, a child in Boston, from the clutches of evil spirits. And when the two Salem girls, Abigail Williams and Betty Parris, began showing symptoms similar to those described, the news provoked hysteria in the village.

In Salem, widely known for its quarrelsome residents, witchcraft became the force behind medical maladies, acts of delinquency or any behavior not easily explained. Two magistrates began questioning adults, mostly women, whom village children accused of demonic activities. Establishing a court of oyer and terminer enabled the death penalty to be considered, but the court continued the practice of honoring “spectral evidence”—testimony about paranormal phenomena.

Soon after the court was commissioned, the hangings began. Bridget Bishop was the first, on June 10. No citizen was immune. Village minister George Burroughs had fled to Maine when accusations turned toward him. He was arrested there, returned to Salem, tried for witchcraft and hanged. Somewhat alarmed, Cotton Mather warned the court that spectral evidence should be used only sparingly. But the trials and hangings—many based on spectral evidence—continued. Between Aug. 5 and Sept. 17, 20 defendants were tried and condemned for witchcraft. Of these, 19 were hanged and one, Giles Corey, was pressed to death under a rock for refusing to confess.

In early October, Increase Mather attempted to restrain the hysteria. He published a tract urging “sober cautions against the over-hasty suspecting or too precipitant judging of persons.” He suggested that Satan might be devious enough to make innocent people behave like witches. “We are bound by the rule of charity to think otherwise,” Mather wrote. But within a week, Gov. Phips declared the use of spectral evidence illegal in the court of oyer and terminer. On Oct. 29, Phips disbanded the court altogether. Though Phips released most awaiting trial and later pardoned those condemned to death, when it was over—more than a year after it started—20 citizens had been put to death.

In 1711, the Massachusetts legislature voted to absolve those accused of witchcraft and offered restitution. In 1752, Salem Village changed its name to Danvers. And in 1957, the commonwealth of Massachusetts apologized for what had taken place in Salem under color of law.