Word Game: 'The denotations might be the same; the connotations are entirely different' 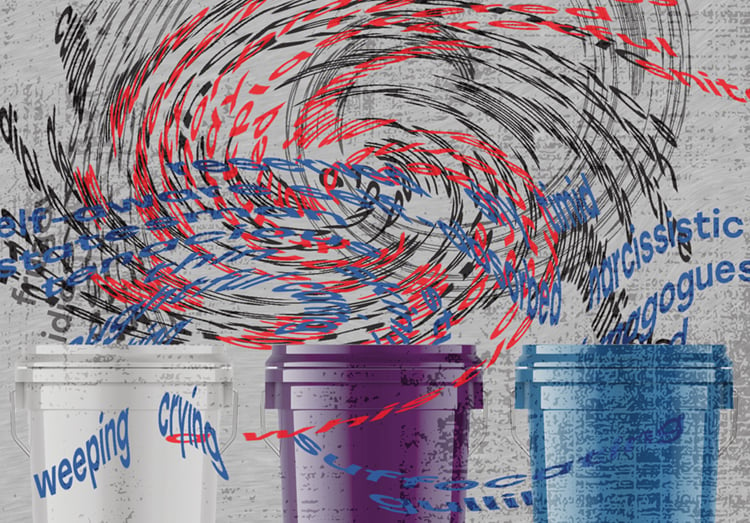 So many things can be characterized positively, rather neutrally and extremely negatively. For word-lovers, inventing examples of trifurcated terminology can be a great parlor game.

The idea first became popular in 1948, when the philosopher Bertrand Russell spoke on a radio program and mentioned what he called “emotive conjugations,” which are variable depictions of the same phenomenon based on differing perceptions or points of view. They follow an I’m/you’re/they’re pattern, and in their three categories, they mimic verb conjugations (go/went/gone, etc.). They’re used to show different slants on a trait, mindset, act, etc.

The idea is to say I’m X (very positive); you’re Y (much less positive, perhaps negative); they’re Z (quite negative). Hence, I’ve reconsidered; you’ve changed your mind; they’ve flip-flopped. The denotations might be the same; the connotations are entirely different because they make us feel more or less favorably disposed. Word choice can affect how we perceive and describe the very same things or behaviors.

I call these linguistic trios “spin conjugations,” some call them “emotive conjugations” and still others, “Russell conjugations.” The grammatical term conjugation, of course, is here used in a jocular, figurative sense.

Lawyers, of course, are well familiar with the impact that labeling can have. Sometimes there are only two real choices: pro-life/anti-abortion and pro-choice/pro-abortion. In recent lawsuits, lawyers and judges had the choice between using the neutral abortion providers or the more tendentious abortionists. We generally expect judges to use neutral terminology that is considered acceptable to the people being referred to. But it doesn’t always turn out that way.

It comes up in litigation involving nonbinary people (as many prefer to be called). Are they nonbinary, transsexual or gender-dysphoric? Similarly, do we say gay, homosexual or something else? There are lots of old dysphemisms to avoid if we seek to be—or to appear—fair-minded.

In our book Making Your Case: The Art of Persuading Judges, U.S. Supreme Court Justice Antonin Scalia and I discussed the importance of the “semantic playing field.” Labels can make an enormous difference. We cite the example of a lawsuit challenging regulations on speakers at college campuses. You might call it hate-speech litigation, or you might call it speaker-ban litigation.

The lawyers challenging the regulations, of course, used the latter phrase—and remarkably, they succeeded in getting everyone else to use the same phrase. Once that happened, the result seemed almost preordained. So you must remain semantically acute: You should be wary of adopting an opponent’s slanted characterization. The slanting can be subliminal.

One aspect of linguistic astuteness involves denials of derogatory characterizations. If someone calls your client a liar, you’d be ill-advised to assert, “My client is not a liar!” It’s far better to avoid the negative term altogether. Don’t repeat the negative word liar. Instead, you might say, “My client has dedicated her entire career to truth-telling and transparency,” or something of the kind. Once you start repeating the connotatively charged word your opponent has planted, that’s what will stick in readers’ and listeners’ minds. If someone falsely accuses you of being late, don’t say, “I wasn’t late.” Instead, say, “I was right on time.” Avoid the word late. To assert that you weren’t late makes you sound defensive; to say that you were right on time makes you sound confident.

Oh, and by the way, in terms of spin conjugations, I’m self-confident. You’re self-satisfied. They’re brazenly smug. You see? When the change is subtle, as in the shift from the first to the second category, the writer isn’t just saying something to you but whispering as well.

The most interesting examples provide starkly different characterizations of the same phenomenon: I made a clean breast of things. You confessed. They spilled the beans. Or I informed against someone; you betrayed that person; they double-crossed or ratted on the person.

I’ll leave you with a few more examples. See whether you can devise a half-dozen more that you’ve actually encountered in your work as a lawyer. I’ll collect and publish them, perhaps in this very space. Send your examples to [email protected] Happy conjugating.

This story was originally published in the October/November 2022 issue of the ABA Journal under the headline: “Spin Conjugations: ‘The denotations might be the same; the connotations are entirely different’ “

Bryan A. Garner is the president of LawProse Inc., distinguished research professor of law at Southern Methodist University Dedman School of Law, and the author of more than 25 books relating to jurisprudence, advocacy, legal drafting, English grammar and legal lexicography. Follow him on Twitter: @BryanAGarner