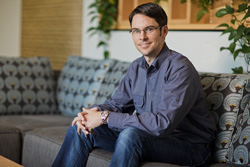 Rick Klau, a partner at Google Ventures, still remembers his first ABA Techshow. It was 1996, he was a student at the University of Richmond (Va.) School of Law, and most people had barely even heard of the Internet. He was especially struck by renowned technology lawyer G. Burgess Allison, who led the popular “60 Sites in 60 Minutes” session that traditionally closes Techshow.

“When Burgess Allison did his talk, most lawyers there didn’t even know of 60 websites total,” Klau says, “let alone 60 sites that could help their practices.”

Now Klau is in a position to educate attorneys himself.

As a leader of Google Ventures’ Startup Lab—which connects entrepreneurs from portfolio companies with experts at Google Inc.—he will deliver the keynote address at the ABA Techshow, which will take place March 27-29 at the Hilton Chicago.

It promises to be different from Techshows past, featuring crowdsourced offerings, lots more opportunities for learning and a visit by a prominent Watergate figure.

Klau, who will speak on Friday, March 28, was surprised he was asked to be the keynote speaker, considering his entire professional career has been in the business sector. However, he also notes, attorneys frequently ask him what kinds of innovations are on the horizon, and his experience puts him in an ideal position to help them look ahead.

“I’m in an incredibly fortunate position,” says Klau. “I work with more than 200 companies that we’ve invested in, and many of them are actively laying the groundwork for what the next five to 10 years are going to look like.”

Klau points to Google’s recent purchase of Nest Labs—a company that makes programmable, self-learning, WiFi-enabled thermostats as well as smoke and carbon monoxide detectors—as an example of something coming down the pike that could have a profound effect on how individuals and companies behave. The $3.2 billion deal announced in January was the culmination of a long-term plan that started three years ago when Google Ventures first decided to invest in the company.

“I’ve known about Nest for a while and knew they would change things,” Klau says. “What Nest has done is a prelude to what they can accomplish with Google’s resources at their disposal.”

Klau intends to focus his keynote on encouraging innovation and giving lawyers pointers on how to bring about change.

“The legal industry can learn a lot from Silicon Valley and how we think about innovation,” says Klau, who joined Google Inc. in 2007 before moving to Google Ventures in 2011. He says he will encourage lawyers to take bigger risks and to shoot for major innovations instead of settling for incremental change. Klau argues that lawyers must learn to think differently if they want to innovate.

“It’s one of the things we talk about a lot at Google and Google Ventures,” he says. “Small incremental progress is often toxic to extraordinary innovation. You have to take bigger risks.”

Of course, Techshow isn’t just about big ideas. According to Techshow planning board chair Natalie Kelly, director of the State Bar of Georgia’s law practice management program, the board deviated from normal practice by soliciting suggestions from attorneys as to what they wanted the show to cover. Kelly says many attorneys said they wanted to learn about products and how to use them in their practices.

As such, this year’s Techshow will focus on teaching lawyers the basics. In addition to the traditional e-discovery, large firm and cloud tracks, there will be a brand-new how-to track that will tutor attorneys on topics such as navigating social media and using Dropbox safely.

Techshow 2014 also debuts an iPad track, as well as tracks that deal with Microsoft Office, Excel and PowerPoint. There will also be a new track dedicated to cybersecurity.

In addition to the tracks, Kelly says there will be drop-in booths operated by law practice management advisers from state bars throughout the country. “Attendees can learn about tech,” she says, “and get guidance from people who do this for a living.”

Meanwhile, Klau won’t be the only big name at Techshow. Kelly says John Dean—Watergate whistleblower and Richard Nixon’s White House counsel—will be on hand to talk about ethics during the Saturday plenary session. And, of course, Saturday’s final session will be “60 Sites in 60 Minutes.”

“This year some programs are crowdsourced,” Kelly says, “so if you have your own tip or site you’d like to share, you can submit it.”

This article originally appeared in the March 2014 issue of the ABA Journal with this headline: “Techshow Googles up: Startup Lab’s Rick Klau to keynote conference.”