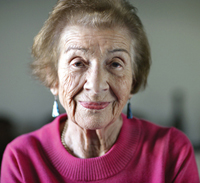 Sara Selman is 86 years old now, and she lives a quiet lifein Tarzana, Calif., part of the sprawling San Fernando Valley near Los Angeles. But she still is haunted by many painful memories from 70 years ago, when she spent practically all of World War II in Nazi concentration camps.

Selman was 16 when the war started in 1939, and German forces already occupied much of her native Czechoslovakia. For roughly six years, Selman was forced into humiliating and physically devastating labor—from digging trenches to working in a brick factory to walking for miles to unload vegetables from boats—while being moved from one camp to another.

“They took us to a concentration camp called Ravensbrück,” recalls Selman. “When we arrived, they put us in a cell for a few days without a bed or anything. Then they put us in another cell—I remember the cell number was 21. We slept four of us in one bunk, and they gave us small portions of bread and food. The SS beat us all the time.” She also recalls being subjected to medical experiments, which in the hands of Nazi doctors often were nothing more than an excuse for torture.

At some point, Selman learned that American forces had breached the German border. “The Germans wanted us to march—I think they wanted to kill us,” she says. “Seven of us escaped and spent three or four days hiding in a pigsty. When we heard the shooting stop, we walked back to the concentration camp because we didn’t know where else to go. There were the American soldiers, and they liberated us.”

Once free, Selman insisted on returning to her hometown because she was sure her family would be reunited. “Nobody came back but my brother,” she says. “I lost my mother, father and sister.”

Selman and a dwindling number of people like her are the reasons the Holocaust Survivors Justice Network came into existence and quickly grew into a massive pro bono effort serving individuals throughout the United States and Canada.

The network helps Holocaust survivors apply for reparations from the German government. “More than 2,600 lawyers plus 1,000 other legal professionals—including paralegals, law students, law professors and administrators—staffed clinics in 31 cities in 23 states, Washington, D.C., and Canada,” says Stanley W. Levy, a counsel at Manatt, Phelps & Phillips in Los Angeles who is the network’s national volunteer director. “More than 4,000 survivors have filled out applications, and 90 percent have been approved.”

These efforts were recognized by the ABA in 2009, when the Holocaust Survivors Justice Network received a Pro Bono Publico Award from the Standing Committee on Pro Bono and Public Service.

“This was one of the most effective delivery systems for legal services we’ve ever seen,” says A. Michael Pratt, a partner at Pepper Hamilton in Philadelphia who chairs the pro bono committee. “Lawyers around the country came together in a very expeditious way to represent some of the neediest members of our society. They produced real results that affected the lives of Holocaust survivors in a very meaningful way. That’s an amazing feat.”

In 1997, Germany’s highest court held that people forced to work in ghettos in Nazi-occupied territories during World War II were entitled to pensions from the German government. “However, of the 50,000 applications, more than 90 percent were rejected on highly technical reasons,” Levy says.

Then in 2007, the German government introduced the German Ghetto Work Payment Program to provide a one-time payment of 2,000 euros—some $2,900 at current exchange rates—to forced laborers in Nazi-controlled ghettos. The standards are more relaxed than those required to qualify for a pension under the 1997 program.

“A lot of survivors are living below the poverty line,” says Jeffrey A. Kobulnick, an associate at Foley & Lardner in Los Angeles who lost relatives in the Holocaust. “This is a one-time payment that can make a big difference in their lives,” he says. Kobulnick is a member of the national pro bono committee at Foley, which participates in the Holocaust Survivors Justice Network.

But the application process still can be wrenching. Claimants must fill out numerous forms and answer repetitive, detailed questions about their imprisonments by the Nazis.

“What survivors have to go through to get payment is unbelievable,” says Robert L. Cohen, a partner at Kutak Rock in Omaha, Neb., who mobilized volunteers in his firm’s offices to participate in the network. “It’s also emotional for survivors to talk about dates and places. It brings up all the emotions that are always with them.”

In addition to assisting clients on a range of general legal matters, the firm has worked with Holocaust survivors on benefits available to them. “We’re one of the only agencies in the world that has this specialized expertise, and we realized we could train volunteers in other cities to help survivors with this application,” says Mitchell A. Kamin, Bet Tzedek’s president and chief executive officer. “Manatt, Phelps & Phillips helped us conceive the program and recruit other firms across North America.”

That’s how Levy got involved. A member of Manatt’s pro bono committee, he had extensive background in the free legal services field. Among his achievements, he was a co-founder of Bet Tzedek.

Nevertheless, when Levy volunteered to help applicants for payments from the German government fill out their forms, he expected it to be for a few hours. He didn’t know Bet Tzedek and Cristin Zeisler, Manatt’s director of pro bono activities, had other plans for him.

As Levy recalls, “I happened to call Cristin and say, ‘I’m confused about what day I’m going to do the clinic. Is it this Thursday or next?’ She said, ‘It might be every day.’ ”

With the firm’s backing, Zeisler asked Levy to coordinate the national rollout of the Holocaust Justice Survivors Network. Levy, an ordained rabbi, could hardly refuse.

“I was born in December 1941, and I’m Jewish,” Levy explains. “As a kid growing up, the Holocaust was very fresh. I became fascinated trying to understand how one of the most civilized and technologically advanced countries in the world could develop an industry to annihilate the Jewish people. It helped really frame my life. I thought it was an obligation of lawyers and Jews to make a better world.”

In addition to coordinating the network, Levy insisted on working directly with a survivor in completing an application. His client recounted how her family was transferred to Auschwitz after her ghetto was liquidated, and she never saw her parents again. At Auschwitz, the woman and her twin sister were subjected to experiments by Dr. Josef Mengele, who was known as “the Angel of Death.” Levy says, “She took out her piece of paper showing she was one of the people in the clinics, and I broke down and cried. It really affected me deeply.”

Other lawyers in the network have had similar reactions. “I was at a meeting in our Denver office,” Cohen says, “and a longtime partner of mine—a 60-year-old man—came to tell me how amazing the experience was for him. I heard stories like that from other lawyers in our firm. To me, that was the benefit of this program.”

In October, the network began mobilizing its volunteers again after a German court ruled that the agency administering the pension program for forced laborers was improperly denying survivors’ applications. “The network will now assist thousands of survivors in reapplying or making sure their applications are properly processed,” says Levy.

The network’s organizers also are looking at how it might reach beyond Holocaust survivors to provide a broader menu of legal services to elderly people around the country who can’t otherwise afford to hire lawyers. “We have people in all these cities who are anxious to continue to work with us,” Kamin says, “and we want to be able to do that.”