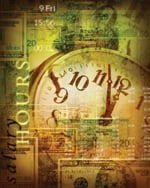 When associate salaries jumped significantly in the late 1990s, partners at Seattle-based Perkins Coie wanted to keep up, but they also knew there was some value to a billable-hour requirement below 2,000 hours a year—the norm among Pacific Northwest firms.

After speaking with associates, they came up with a plan. Perkins Coie would match the rising salaries—influenced by California firms opening Seattle outposts—but the raise would be tied to an increase in billable hours. Al­ternatively, if associates didn’t want to work more, they didn’t have to. They’d just forgo the salary increase.

“There’s never something for nothing,” says Robert Giles, the firm’s managing partner. “I think we sold it by talking to associates about what they wanted to do.” Perkins Coie has a similar plan today, a few months after many large law firms raised starting associate salaries to $160,000 a year.

“The key to it is that you know what you will get in advance because it’s laid out in writing at the beginning of the year,” he says. “I typically will work more than the requirement and earn more at the end of the year. But with kids at home, I appreciate the option.”

IN STEP WITH THE TIMES

Perkins Coie is among only a handful of firms offering plans under which associates who don’t want to bill more than 2,000 hours a year can forgo the recent raises. But more firms may follow suit, particularly if large firms raise associate salaries again by the end of 2007, as some legal blogs have predicted.

Plans like the one offered by Perkins Coie are a good thing, says legal recruiter Julie Q. Brush of Redwood Shores, Calif. And she speculates that top associate can­didates may even start seeking out law firms that offer this flexibility. “But initially they’re going to be skeptical in regard to whether it really works,” she adds.

Susan C. Robinson, the associate dean for career serv­­ices at Stanford Law School, says she’s seen this happen. A number of associates have told her that they’d like an option like the one Perkins Coie offers. But they’re also concerned that taking such a deal might lead to being seen as someone who is not committed to the firm—and who would not qualify for partnership.

“It’s a big concern because of what it could signal—that you’re not as committed, and you’re not a star,” Robinson says. “What a lot of people want is more sane hours but to still be seen as committed to the practice.”

Giles dismisses these concerns. Perkins Coie, he says, doesn’t publish a list of which associates opt to work less, so he doubts that many know a person’s choice, unless he or she reveals it.

He acknowledges that other firms have tried similar plans and failed, largely because people felt the plans created a caste system. “We always avoid trying to label it; we just say it’s a flexible track,” Giles says.

Regardless of your specific track, a starting salary of $140,000 or more is pretty impressive—particularly if you can work fewer than 2,000 hours a year to get it.

“The big firms are offering hours that midsize firms offer, but at more money,” recruiter Brush says. Such plans, she adds, may decrease turnover among more senior associates.