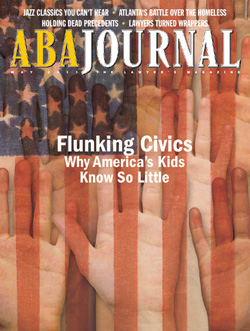 The no-holds-barred fight to close a homeless shelter reported in “Battle of Atlanta,” May, illustrates another dimension of the cover story, “Flunking Civics.” Americans have less respect for the rule of law and commitment to justice not only because there are fewer civics courses but also because some elected officials, business leaders and, unfortunately, lawyers work to deny those who oppose their interests legal representation rather than resolve their disputes in courts.

Some of the powers that be in Atlanta have been working to cut off shelter funding and pressure its lawyers to abandon their client. These strategies aim to close the shelter not by following the normal legal process but by using extralegal means to limit its access to the courts. One business leader even admitted there was no strategy to injure the shelter that hadn’t been taken. This teaches the children of Atlanta that might is right in the minds of those community leaders held up as role models.

Lawyer ethics rules and the ideals of the profession have long recognized the responsibility to make legal services available to those unable to pay. This extends to not interfering with an opposing party’s access to services. Indeed, a lawyer acting with business and political leaders to induce a lawyer to drop his client also undermines the fair administration of justice, which requires the availability of competent lawyers for anyone with a legal dispute.

As teachers of professional responsibility, the shelter story illustrates to us why it is necessary for the ABA to focus more attention on educating law students and lawyers about the need to respect the profession’s ideals and history about access to representation. This would be a concrete step toward ensuring that all lawyers, even those working for the haves against the have-nots, will set a good example about how our commitment to justice should work in this country.

One story in your May issue unwittingly explains another. The cover feature laments the decline of history and civics lessons in the nation’s schools. “As a result,” said a report cited in the article, “many young Americans are not prepared to participate fully in our democracy now and when they become adults.”

Perhaps it is because I was educated by nuns that I was both well-taught in civics and learned not to question punishment for truly stupid lapses in youthful judgment. I am sad for the youth of today, whose sexting is promoted by our courts as a legitimate freedom while humanity’s timeless yearning for genuine freedom is neglected by our schools. (The parents who led their sexting kids to the courtroom are complicit.)

I have been heartened in recent months by the push within the ABA to encourage more civic and government education. In college I tutored underclassmen in U.S. government and history. I was constantly amazed these students were able to gain entry into a major four-year institution given their lack of knowledge about their own country. We often did not even get to the structure or purpose of the Supreme Court during a semester due to the level of remediation necessary on the executive and legislative branches.

My disappointment only increased after graduation. More than one administrator told me they needed a football coach more than a history teacher. Thank goodness for my college adviser, who suggested I attend the Programs Advancing Citizenship Education sponsored by the Oklahoma Bar Association. My experience at PACE was a large part of what led me to law school. Until administrators begin appreciating the value and importance of civic education in students’ everyday lives, the current standards, to the extent any exist, will not change.

Some 10 years ago a dedicated group of judges, lawyers and high school teachers addressed civic illiteracy among high school students in Sacramento, Calif., by establishing Operation Protect and Defend. The local bench and bar, as well as area law schools, are making a significant effort to address the critical educational gap that your cover story exposed. If the bench and bar in your community have not yet engaged in a concerted civic education outreach, you may wish to obtain information about Operation Protect and Defend by visiting our webpage at saclawfoundation.org.

We are sworn defenders of the Constitution, but if we fail to discharge this responsibility to our nation, we surely must be held accountable in great measure for the tragic legacy of civic illiteracy.