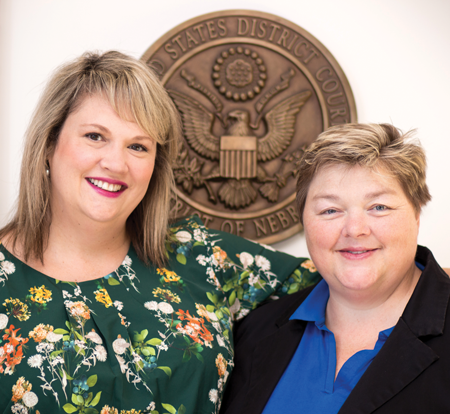 Could a love of the law run as deep as your genes? The case of Julie Hansen and Kelly Mahoney Steenbock makes a compelling argument that it might be so. Born five years apart, both women were raised in Bellevue, Nebraska, and lived less than 5 miles apart, although they never knew each other.

Despite hardscrabble backgrounds with no funds for higher education, each decided at an early age to attend law school. It was only after weeks of working together as public defenders for the U.S. District Court for the District of Nebraska that the women discovered they were half sisters.

“Kelly was new, and there were a few of us in my office, chatting about weekend plans and getting to know her,” Hansen recalls about the day in March 2015.

When Steenbock and another colleague compared soda bread recipes and Irish backgrounds, she casually mentioned that her dad’s name was Robert Mahoney.

“She wasn’t even talking to me, but I overheard her, and it sent this shock through me,” Hansen says. “It was like something surreal was happening.”

Hansen’s father, now deceased, also was named Robert Mahoney. But he and his family never acknowledged Hansen, whose mother was 16 when she was born. Instead, Hansen was raised by her single mom and maternal grandmother a few miles from where Mahoney eventually settled and started a family. Between his job as a truck driver and his heavy drinking, Mahoney was a rare sight at Steenbock’s home and nonexistent for Hansen. Although Hansen reached out to him after she graduated from high school, she never heard back.

Hansen didn’t want to mention a possible shared paternity without more proof, so she tried to seem casual as she peppered her new co-worker with follow-up questions. “I thought she was being obnoxious and interrupting the conversation I was still having with someone else,” Steenbock says.

As the clues unfolded—an aunt named Terry, a paternal grandma’s yarn shop—the women realized their histories were connected. “We both started crying and hugging,” Hansen says.

As the co-workers looked on, slightly confused, the half sisters ran through their personal narratives, from visiting the same dentist and pediatrician in town to attending the same college, staggered by five years. Hansen learned precious details about her father, including that he shared the same quick wit and intellectual curiosity that eventually led her to the law.

“I didn’t know my father, but from what Kelly said, if he’d put his mind to work instead of drowning it, he probably would have done something similar to what we’re doing,” Hansen says.

It’s been two years since the half sisters uncovered their tangled and intertwined family roots. But their awe at the odds of finding each other has hardly lessened.

“What are the chances that we’d find each other this way, sitting in an office right in front of each other, working in the same profession?” Steenbock says. “It’s definitely a one in a million shot that it happened this way.”