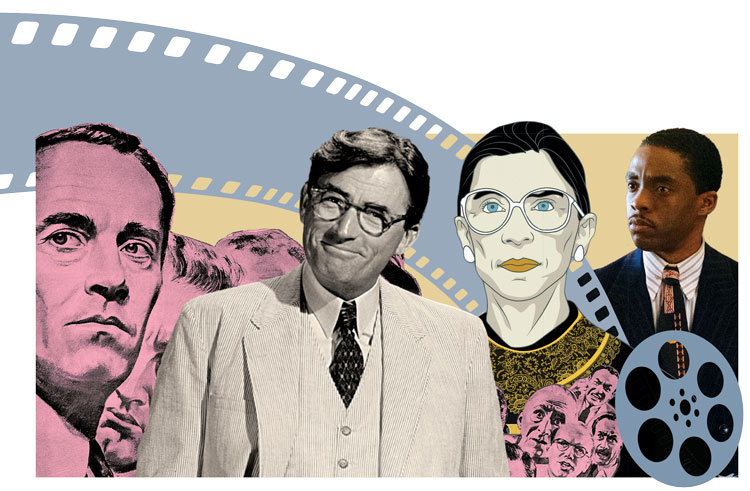 Pictures are worth more than a thousand words—especially when sequenced into moving pictures. Our imaginations are fueled by the consumption of high-octane visual stories. The American cinema is, in the words of film historian Robert Ray, “one of the most potent ideological tools ever constructed.”

Last year, the World Justice Project, a rule of law watchdog organization, released its Rule of Law Index 2019. The index measures how the rule of law is experienced and perceived by the general public worldwide and is based upon 120,000 household and 3,800 expert surveys.

In the most recent index, the United States ranked 20th of 126 countries. The United States placed 14th out of 24 countries in a geographical cohort of countries from the European Union, European Free Trade Association and the North American region. And we were 20th of 38 high-income countries. We rank securely in the bottom half of both cohorts.

What does this index have to do with the power of movies, television and other forms of popular cultural storytelling? Plenty. Movies and anti-legalism Educational psychologist and lawyering theorist Jerome Bruner argued that our attitudes, beliefs and identities are shaped and informed by the stories that we consume and, in turn, by the stories that we then tell to others and ourselves. Simply put in the slogan of an earlier time, “You are what you eat!” Similarly, we are especially influenced by the visual stories we binge on—including movies and television programs.

In the 2016 article “Cinematic Anti-Legalism: Recent Hollywood Movies’ Rejection of the Belief in Law,” published in the Journal of Popular Film & Television, professor David Ray Papke of Marquette University Law School draws compelling connections between the decline in our collective belief in the effectiveness of our legal system and the stories told in Hollywood movies—including six blockbusters that were identified on the Internet Movie Database listing in 2015 as the most popular recent law movies, based on box office returns.

But these are not the courtroom movies that dominate the list of 25 Greatest Legal Movies in the ABA Journal’s initial 2008 survey: To Kill a Mockingbird (1962), 12 Angry Men (1957), My Cousin Vinny (1992), Anatomy of a Murder (1959), Inherit the Wind (1960) and Witness for the Prosecution (1957). The six top ABA lawyer-favorites are, not surprisingly, movies that focus upon legal proceedings, feature sympathetic lawyer-protagonists and also provide hard-won affirmations of our belief in legality and the rule of law.

The movies atop the ABA survey suggest that there is integrity and order in the legal system. In 12 Angry Men, My Cousin Vinny and Inherit the Wind, the legal system works, and the rule of law ultimately prevails. Anatomy of a Murder and Witness for the Prosecution depict the artful combative courtroom skills of the trial lawyers. And in the top-rated To Kill a Mockingbird, Gregory Peck’s Atticus Finch provides a compelling and redemptive portrait of the hero-lawyer struggling against systemic racism.

This is not so in Papke’s list of six legal-themed Hollywood blockbusters. In the comedy Liar, Liar, for example, lawyer Fletcher Reede’s (Jim Carrey’s) professional successes are premised on his willingness to distort the law and lie guiltlessly. In the musical Chicago, ace litigator Billy Flynn (Richard Gere) lyrically reveals the secret sauce of his legal success: “It’s all a circus. A three-ring circus. ... it’s all ... show business”—all “flimflam” and the old “razzle dazzle.”

“Intriguingly, these six immensely popular law movies do not champion a belief in law. Indeed, the movies instead proffer a pronounced skepticism regarding law,” Papke observes. “The films portray law as flawed and unreliable and suggest that legal institutions routinely malfunction in American life. These Hollywood movies stand for a type of anti-legalism, one that virtually turns ideological presumptions about law upside down.”

Papke concludes, “The six movies suggest a ‘cinematic jurisprudence’ that would trouble anyone who thought that the law could and should reign supreme in American life.”

Just the tip of the iceberg

Anti-legalism has long been embedded in popular attitudes about the efficacy of the rule of law captured in Hollywood movies, as well as in other forms of pop cultural storytelling.

For example, a turn to legal skepticism occurred during the 1960s and was mirrored in films. Movies became increasingly anti-authoritarian and anti-law, featuring sympathetic portrayals of protagonist-outlaws operating outside of the law with films including Bonnie and Clyde (1967), Easy Rider (1969) and even Alice’s Restaurant (1969).

In the 1970s, disbelief in the possibility of achieving systemic justice was apparent in a cultural backlash of “revenge” movies, set in a time when, for many, America seemed in moral decay and decline during the post-1960s Richard Nixon-Watergate era. In Hollywood’s graphic dreams, violent vigilante protagonists responded by taking the law into their own hands outside of corrupt and ineffective legal processes. Think of the popular Charles Bronson revenge film Death Wish (1974) or of Clint Eastwood’s Dirty Harry movies.

Arguably, the greatest auteur films of the second half of the 20th century are Francis Ford Coppola’s Godfather films, Roman Polanski’s Chinatown and Martin Scorcese’s various mob movies. Here, the law is depicted as ineffectual, corruption in the legal system is rampant, and order is embodied in curious forms of tribalism. For example, in Coppola’s and Scorcese’s movies, mafia codes substitute for the rule of law. The legal system is broken; rich and powerful villains get away with rape, incest and murder. “Forget it, Jake. It’s Chinatown.”

In the 21st century, long-form television stories combine the visuality of movies with the complex themes and character development of realist novels. These programs also reveal underlying cultural attitudes toward law—including skepticism about the possibilities of ever achieving systemic justice, evidenced in shows such as The Wire, The Sopranos, Deadwood, Breaking Bad, House of Cards, Billions and Ray Donovan.

All operate in lands far beyond reach of the rule of law.

In our time, skepticism about the efficacy of the rule of law is heightened by the divisiveness of cultural politics and endless media stories about our broken legal and political systems, reinforced by droning commentaries by pundits who are often trained lawyers.

Some lawyers trade upon their clients’ disbelief in the possibility of achieving systemic justice.

For example, they may cast blame for unfavorable outcomes upon the unfairness of the system, the political predispositions of unjust judges or even the practices of opposing ruthless and unethical lawyers rather than upon inherent weaknesses in the client’s case or the availability of persuasive counterarguments.

Recently, I shared my dark-side prognostications about cultural skepticism and the rule of law with Jack Sammons, legal ethicist and professor emeritus at Mercer Law School. Sammons observes: “Because we are so much at odds with each other ... it is no wonder that we think others are corrupt and law is failing.”

Sammons adds that what lawyers say about the law, the courts and other lawyers is “terribly important,” and in turn helps shape popular opinion.

“The public’s perception of law is malleable; it has been manufactured; it distorts reality; it is skewed by many factors. So, the takeaway [for lawyers] is that you [lawyers] have an enormous opportunity through your clients not to justify what is done in the law now but to describe it honestly. ... So, stop blaming judges when they are not to blame, stop blaming technicalities when you know they aren’t that, and on and on.”

In 2018, the ABA Journal updated and expanded its list of 25 Greatest Legal Movies. The new list includes: RBG (2018), the documentary about Ruth Bader Ginsburg’s legal fight for gender equality; Marshall (2017), about a young Thurgood Marshall’s collaboration with a Connecticut lawyer battling for a poor black defendant wrongly accused of raping a wealthy white woman; and Loving (2016), about Richard and Mildred Loving’s successful struggle in collaboration with an American Civil Liberties Union lawyer to overturn Virginia’s anti-miscegenation law.

These lawyer-favorites are often about heroic lawyers and other professionals vindicating the rule of law—although the new movies now recognize fundamental systemic injustices.

Do these mostly affirmative movies signify the swing of the pendulum of public opinion toward belief in the efficacy of the rule of law in America? Honestly, I doubt it.

What can lawyers do about reshaping popular opinion? We can follow Sammons’ admonitions about the importance of what we say and how we speak in our professional practices. And with our actions, we can follow the examples set by the lawyer-heroes in the movies that lawyers still seem to love.

This article ran in the February-March 2020 issue of the ABA Journal under the headline:“Reel Justice: The films that become Hollywood blockbusters reveal popular skepticism about the rule of law”