The sadistic editor and the lawyer who survived his wrath 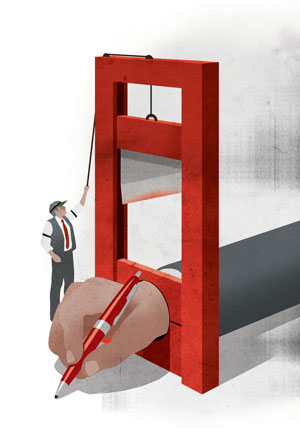 Over the years, I've heard many lawyers tell stories of bosses—senior lawyers—who were explosively hostile, abrasive, cruel and dogmatic. They seemed to derive self-satisfaction from dominating, intimidating and humiliating their subordinates. I've not only heard others tell stories of such "mentoring" personalities but also witnessed them myself. In fact, I once worked for a lawyer who complained bitterly about his own supervisor in the 1950s who behaved pretty much as my supervisor was behaving in the 1980s: extreme dogmatism coupled with sudden outbursts of rage. The realm of legal practice in which this behavior most commonly manifests itself has to do with writing.

But before we get to legal writing, let’s first investigate such a personality in a different field: music. An old-school style of training, that of frightening the pupils, was a favorite of the renowned Midwest bandmaster William Revelli (1902–1994), who as an itinerant clinician used what insiders came to see as a predictable psychological ploy on his students. Let’s say Revelli was to rehearse five pieces of music with an all-state high-school symphonic band over a two-day period and then conduct a concert on Saturday night. He’d appear Friday morning after another conductor had warmed up the band—and he’d take the podium with an air of imperious theatricality.

Revelli would have the band play the C-major scale and after a few notes would isolate one player—typically the principal clarinetist—as the object of his wrath. Before the 100-piece ensemble, he’d make the clarinetist play the scale alone. Mind you, this is the best clarinetist in the state. “No! No! No! Horrible sound! Support with your diaphragm!” The ire and intermittent shouting would last about five minutes. Revelli would excoriate the player by suggesting incredulity that he or she could be the best clarinetist the state had to offer. Often the player would be reduced to tears.

As the symphonic band continued to rehearse over the day, Revelli would direct outbursts toward various players but would continue accusing the principal clarinetist of having inadequate breath support and an awful sound.

By midday Saturday in this marathon series of rehearsals, Revelli would begin to praise the principal clarinetist. By 4:30 p.m. that second day, as the time for the public concert approached, the tyrannical conductor would declare that the clarinetist had transformed his or her sound into that of a professional player. The entire all-state band, in fact, had gone from one of the most miserable bands ever (the day before) to one of the best ever.

The implication was always, of course, that this magnificent transformation had occurred because the students had come under the magical tutelage of Revelli, whose cruel bluff, miraculously enough, almost no one never called.

Now let’s turn to law. Almost every sizable law office seems to harbor a personality akin to what I’ve been describing: a senior lawyer, usually male, whose primary interpersonal strategy is aggressive domination. Though successful in his own way, his primary approach to subordinates is negative pressure and the infliction of psychological suffering. If someone makes a mistake, he doesn’t call that person aside into the privacy of his office to correct the error but instead makes a public spectacle of intimidating, humiliating and demeaning the person in front of other employees. Everyone is expected to recognize his expertise and exacting perfectionism.

What brought this phenomenon to mind was a recent conversation with an eminent New York lawyer. This New Yorker (we’ll call him “Edmund”) recalled the partner to whom he was first assigned in the 1950s, when Edmund was fresh out of law school. We’ll call the partner “Mr. Crombie,” one of a dozen partners at a 20-lawyer firm in Manhattan.

Though now in his 80s, Edmund still trembles when recalling Mr. Crombie, who terrified and brutalized many an associate. Every draft of every document that Edmund drafted was covered with red ink. Many of the marginal comments would suggest Edmund’s incompetence at writing. “Don’t use passive voice!” “This statement is nauseatingly vague!” “Your lack of grammatical parallelism tells me you know nothing about grammar. Alas, I haven’t the time to teach you.” “The comma here is obligatory: Don’t ever omit it again.” “Fused participle!” “Split infinitive!” “Clarify!! Aargh.” Some of these markings actually tore through the paper.

Edmund once prepared a five-page contract with headings only to be chastised in front of the secretarial pool: “Headings are no part of an agreement! Where did you learn to put headings on?! Incompetent law-school profs, no doubt, who never practiced law. Don’t ever do it again. Resubmit in 30 minutes. I’m sorry, Emily [one of the secretaries], but you’re going to have to do this again because of Edmund’s misguided notions. Both of you get to work!” Mr. Crombie stormed off.

If a typographical error ever appeared in Edmund’s work, as when “correct” was mistyped “connect,” everyone within shouting distance of Mr. Crombie’s office knew about it. One of the biggest outbursts occurred when Edmund used the present participle “practicing,” and Mr. Crombie took the quirky position that the verb forms corresponding to the noun “practice” should be written with an “s” as the penultimate letter: “It’s ‘practising’! And don’t you forget it!”

“But Mr. Crombie, I think only the British do it that way,” Edmund said.

“It’s not just the British but anyone who cares about using the English language competently. That’s that.”

Edmund recounted these stories to me because there was a moral to them. For six months, he seriously contemplated leaving the practice of law altogether. He had been made to feel inept, and he feared he’d never measure up. Writing was simply a weakness for him, and he could never do anything but accept whatever Mr. Crombie said. So he was about to concede defeat.

Instead, though, Edmund decided to embark on a course of self-improvement in writing. He bought several books: H.W. Fowler’s A Dictionary of Modern English Usage (then in a now-badly-dated 1926 edition), Eric Partridge’s Usage and Abusage (1942), Robert Graves and Alan Hodge’s The Reader Over Your Shoulder (a classic 1947 text), and Rudolf Flesch’s The Art of Readable Writing (1949). He studied them religiously for over a year in the mid-1950s. Soon he knew much more than Mr. Crombie, and some degree of self-assurance began to appear.

With his newfound expertise, he realized that Mr. Crombie often didn’t know what he was talking about. True, many of his edits were sound, but lots of them were based on ill-founded writing prejudices he’d picked up somewhere along the way. For example, Fowler’s 1926 book authoritatively dispelled the idea that it’s always wrong to split an infinitive; that you shouldn’t start a sentence with “and” or “but”; and that you shouldn’t end a sentence with a preposition.

About six months into Edmund’s self-imposed regimen of daily learning, Mr. Crombie castigated him for using “enormousness” in reference to the impression conveyed by a building: “The word is ‘enormity,’ Edmund—‘enormity’!” Edmund’s secretary was right there listening.

Instead of being downcast and slinking away, Edmund stood his ground. He said calmly: “Mr. Crombie, what’s your authority for that? Both Fowler and Partridge say that ‘enormity’ preferably refers not to great size but to wickedness.”

“The recognized authorities on English usage: H.W. Fowler and Eric Partridge. I can show you here in my office.”

“Never mind!” Mr. Crombie stormed off. A huge turning point in the relationship had arrived. Edmund had begun acquiring the true linguistic know-how that Mr. Crombie had been pretending to have, and it gradually became apparent that Edmund knew what he was talking about. Even the secretarial pool saw it.

When I told Edmund that I might write about his experience, he glanced nervously around the room, as if Mr. Crombie might be watching. “Is Crombie still alive?” I asked.

This article originally appeared in the July 2016 issue of the ABA Journal with this headline: “The Sadistic Editor: And the lawyer who survived his wrath.”

Last updated to correct a reference to Edmund.

Bryan A. Garner, the president of LawProse Inc., is the author most recently of Garner's Modern English Usage, The Chicago Guide to Grammar, Usage, and Punctuation and Guidelines for Drafting and Editing Legislation.