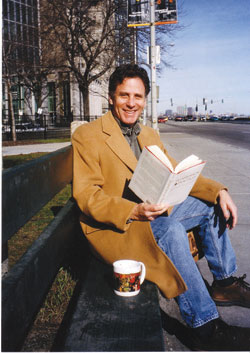 He and his book moved me from my unthinking practice of litigation to an intentional practice of resolution. I may owe him my life. —Jeff Bean, Seattle

I met Steven Keeva at the International Alliance of Holistic Lawyers conference in 1999. Like many lawyers, until I found IAHL I thought I was alone. Law school was rooted in a culture of survival—the reptilian brain and the analytical brain joined in perfect partnership, uncomplicated by any emotion or sense of right or wrong. Law rejected the limbic functions of the brain: nurturing, play, deep feelings and connectedness. I longed for a community of kindred spirits, lawyers who could honor their intellect and embrace their souls.

Being at the IAHL conference among lawyers who were yoga practitioners, energy healers and meditators shocked my Southern, small-town sensibilities. But Steve was there, and he was an editor of the ABA Journal. The ABA was mainstream; it wasn’t scary. Steve wasn’t scary; he was a kind and gentle person. I cautiously allowed my curiosity to explore. By the time Steve’s Transforming Practices: Finding Joy and Satisfaction in the Legal Life was published, I was active in helping lawyers become whole people.

Since then, I’ve met thousands of lawyers. Many can directly track their early transformations to Steve, his book and his columns for the Journal. In those early years, it was like a secret society. Bonita Yoder of Lawrence, Kan., told me that she used to carry a copy of Transforming Practices with her to bar meetings. She would place the book on the table to see if anyone recognized it, and they would share a moment of excited connection. Many lawyers have told me that they bought extra copies of Steve’s book to leave in the back rooms of courthouses, hoping others would find and read them. It was the holy book of the holistic law movement.

Visionaries are by their nature ahead of their time. The ideas in Transforming Practices have grown into the integrative law movement, the cornerstone of which entails being a whole person who not only thinks but feels, has a spiritual life, and practices law in ways that are based upon purpose and values. Entire conferences have been devoted to lawyers and meditation; law schools routinely offer meditation groups. Conferences, law reviews, books, websites and conversations explore ways to advance law as a healing profession as well as ways to promote peacemaking and career satisfaction for lawyers. While the IAHL is gone, it has been replaced by dozens of other organizations, some with thousands of members.

Steve opened a door that allowed many of us to enter new territory. He changed the face of law practice with his courage and brilliance.

Wright, a 2009 Legal Rebel, is the publisher of CuttingEdgeLaw.com and author of the 2010 ABA book Lawyers as Peacemakers: Practicing Holistic, Problem-Solving Law.