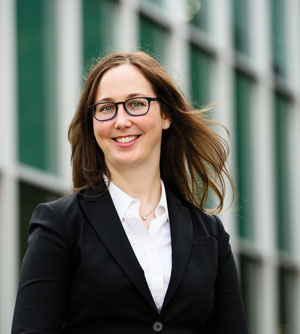 Natalie Prosin doesn't favor guerrilla tactics in the courtroom—more like gorilla tactics. As executive director of the Washington, D.C.-based Nonhuman Rights Project, she manages the day-to-day operations of a mostly volunteer group of lawyers and scientists striving to extend the common-law classification of personhood to cognitively complex nonhuman animals to grant them such legal rights as bodily liberty and bodily integrity. The group recently brought a trio of habeas corpus actions in New York on behalf of four chimpanzees. A case involving elephants is next.

Q. How did the Nonhuman Rights Project come up with the legal strategy for the chimpanzee cases?

A. We kind of worked backward. We started seven years ago with about 50-60 legal issues across all 50 states to find the jurisdictions that would be most receptive to our arguments, which is how we chose New York. Then we said: OK, who’s in New York? We found a handful of captive chimpanzees, all in various settings, and filed three lawsuits in 2013 on their behalf using the ancient writ of habeas corpus. The beauty of the common law is that it’s inherently flexible and can change with social norms and scientific understanding.

Q. Did your strategy involve reaching out to the media?

A. Yes. These are first-of-their-kind lawsuits, and it’s as much about talking to judges as it is about educating the public. These are obviously very complex issues, and it’s easy to misunderstand something or confuse it with another issue. Leading up to the lawsuits in 2013, we worked very closely with top-tier journalists under embargo agreements because we didn’t want to walk into court and have an erroneous, confusing swath of reports. I feel like someone should study the media reaction to what we did—they were incredibly accurate, and that’s because we worked with them to explain what we were doing.

Q. Although all three cases ended this year with appellate court affirmations of lower court denials, one judge ruled that you had standing to bring the case and that your efforts were “understandable.” Do you consider this some progress?

A. It was probably the best outcome we could have hoped for, other than having her completely rule in our favor.

Q. What comes next?

A. We are currently discussing and researching whether we should refile these cases in a different county. That’s one of the many benefits of choosing New York—res judicata does not apply to habeas actions, so you can refile as many times as you want. You can also file anywhere in the state, regardless of where the individual is held captive. So we’re tweaking our arguments to address some of the concerns of the appellate courts, and we’re also trying a different county so we can get to a different appellate court.

Q. Say the courts ultimately grant habeas relief: Where do you want the chimpanzees to go?

A. Ideally, we would love to return these animals to the wilds of Africa where they belong, but that’s not possible in these circumstances. We want to transfer them to a sanctuary where their rights would be most respected and they would be allowed to live as chimpanzees.

Q. So the fight goes on?

A. That is correct. We knew this was never going to happen overnight. In the meantime, we are quite far in our stages of development for our next case, which we will be filing on behalf of one or more elephants.

A. Yes, we’re now in Australia, New Zealand, France, Germany and Argentina, and we’re starting in England—that’s one of our hottest working groups right now. These cases have drawn so much publicity that lawyers around the world have approached us about how to lay the groundwork in their own countries.

Q. Recently a lion in Zimbabwe—named Cecil—that was valuable for research was killed by an American hunter, sparking outrage. Do you think public opinion will help push forward this type of legal change?

A. I do. A recent Gallup poll found the majority of people thought animals should have some sort of rights. Public opinion is changing, and people are realizing that there are certain animals that should not be held in captivity, and they certainly should not be performing tricks for our entertainment.

Q. Have you always been an animal lover?

A. I have always been interested in animal issues. I became a vegetarian when I was a teenager; and growing up in a suburb of San Diego, we always had a lot of companion animals: cats, horses, dogs, chickens, rabbits. But it never occurred to me until graduate school that I could study the issues facing animals and build a career protecting them.

Q. Are you still a vegetarian?

This article originally appeared in the November 2015 issue of the ABA Journal with this headline: “Animal Instincts: This Washington, D.C., lawyer wants the common law to evolve to grant basic human rights to complex animals.”