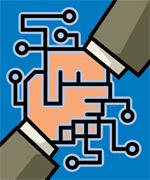 Bothered by “patent trolls,” those pesky creatures who wait for inventions to hit the market and then cry, “I’ve got your patent; now pay me”? John Amster says he has a solution.

Amster, an intellectual property lawyer, is a co-founder of RPX Corp. in San Fran­cisco, which buys up patents. For a fee, subscribers get access to all the patents in its portfolio.

“We provide a patent-defense aggregation service,” he says. “We buy a significant volume of patent rights, either actual or potential threats to companies that will be our members. … [Members] get a license to everything in our aggregation.”

How does RPX know which pa­tents are relevant to clients? “If something’s on the market being shopped by patent brokers and they come to us with a write-up of why your products are infringing on it, that’s a pretty good indication,” Amster says.

In January the firm entered a license agreement with patent port­folio holder Acacia Research Corp. RPX said some defendants in a pa­tent suit Acacia filed could get out of the suit by signing up with RPX.

The cost of membership depends, Amster says, on a company’s revenue.

“RPX is approaching the non­practicing entity issue from a new angle,” Harris says. “Overall, this [approach] can reduce the costs to companies caused by their infringement of patents of others. If the model can work, it’s a win-win.”