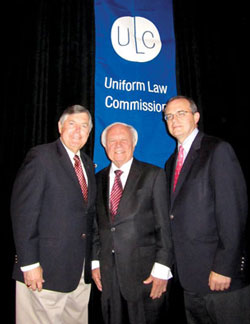 Since I took office in August, I have focused on the ways lawyers give back to their communities and to our country. So many of our colleagues take to heart the model rules of our profession. In these tough economic times, there is so much that can be done to ensure access to justice for all Americans.

In earlier President’s Messages in the ABA Journal, we celebrated lawyers’ pro bono work and efforts to assist members of the military. Another example of volunteerism—which helps enhance commerce and the everyday lives of individuals—is provided by those who dedicate themselves to bringing consistency and clarity to the law.

The Uniform Law Commission has taken on this role for state statutes since 1892. This past year, I had the privilege of attending the 120th annual meeting of the commission in Colorado, where I witnessed an exceptional event of volunteerism and collaboration.

The ULC is the oldest state governmental association and was originally created from a special committee of the ABA. The idea is simple, but the task is complex: Determine where uniformity in state statutes is needed, draft nonpartisan and practical legislation, and advocate for passage of these laws in every state.

The ULC has left an enormous imprint on the American legal landscape. In fact, it has developed more than 300 uniform or model acts for enactment in the states, all of them drafted by volunteer lawyers. From the Uniform Probate Code to the Uniform Trade Secrets Act, the ULC has made many pivotal contributions to state law.

However, the commission is probably best known for the Uniform Commercial Code, which endeavors to harmonize the law of sales and other commercial transactions, and has been adopted in every state. Drafting the UCC was a joint effort between the ULC and the American Law Institute, which continue to work together to keep the code consistent with modern practice and usage.

These uniform codes not only strengthen the federal system by providing rules consistent from state to state; they also foster economic development by creating a stable environment for conducting business in America, for U.S. companies and foreign entities alike.

The ULC comprises about 350 commissioners—from every state, the District of Columbia, Puerto Rico and the U.S. Virgin Islands—who donate time and expertise without compensation. All are attorneys, with some working as judges, legislators, legislative staff or law professors.

At the ULC’s annual meeting, I saw firsthand the dedication of the commissioners, and was truly impressed by the high level of debate and discussion on very complex legal issues. The commissioners were always respectful of other opinions, and the debate was never acrimonious.

At this meeting, the Executive Committee appointed me as an advisory member so I could assist the various committees that study these issues. Other members of the ABA are involved in the ULC editorial boards, which are responsible for monitoring possible avenues for uniformity around the country.

Sustained by generations of volunteers, the ULC has made enormous contributions to state statutory law. The commissioners—those dedicated and hardworking lawyers who do the essential work of drafting and promulgating uniform and model acts—deserve our appreciation and gratitude. Their work helps preserve our federal system by maintaining an appropriate balance of state and federal regulation. And it’s one more way that our profession is making a contribution to our country, and to the laws that guide us each and every day.