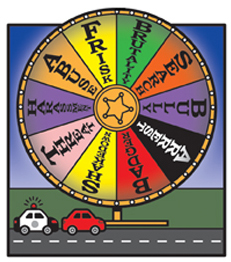 If you do enough driving, it's all but inevitable that you're going to be pulled over by a police officer one day, and it's best to be cooperative (if not polite). The encounter will most likely be conducted professionally and you'll soon be on your way, muttering expletives under your breath. But for some unlucky motorists, things go terribly awry and leave them wondering: "What just happened here?"

According to news reports, an Indiana woman, Lisa Mahone, was stopped for a mere seat-belt violation in late September, with her boyfriend and two children in the car. Hammond police officers ordered Jamal Jones—a passenger—to show ID. Jones didn't have any identification and, the police reportedly say, refused to write his name on a piece of paper. The officers drew their weapons and ordered him out of the car.

After Jones hesitated out of fear, according to his lawsuit, one of the officers smashed the window, showering glass on all four occupants. A Taser was then used on Jones, who was dragged out of the car and arrested. Mahone's son captured the incident on cellphone video.

Mahone and Jones allege excessive use of force and false arrest in their lawsuit filed in the U.S. District Court for the Northern District of Indiana in October.

Also in Indiana, in August, another traffic stop ended in a nonviolent but perplexing way. State trooper Brian Hamilton pulled over Huntington County resident Ellen Bogan and gave her a warning ticket for speeding.

But according to a lawsuit filed in the Southern District of Indiana, Hamilton remained at Bogan's car window and asked whether she had accepted Jesus Christ as her savior. Bogan claims in the lawsuit that she was uncomfortable being asked such a question and felt compelled to answer yes. She says Hamilton then gave her a pamphlet from a local church ministry outlining "God's plan for salvation," and requiring her to acknowledge that she is a sinner.

And finally, on to Texas, where a traffic stop wasn't just perplexing; it (allegedly) got downright kinky.

In August an officer of the Cypress-Fairbanks Independent School District, which includes part of Houston, reportedly stopped a female motorist and told her that her auto insurance had expired. According to ABC13 Eyewitness News, officer Patrick Quinn also said he detected an odor of marijuana, and the woman allowed him to search the car. Quinn claimed to find drug paraphernalia, which she denied owning.

Court documents indicate Quinn told the woman he would allow her to go free if she would let him smell and lick her feet—or she could give him her underwear instead. Though the woman said she agreed to comply with one or both requests, Quinn changed his mind and let her go. The woman subsequently reported the incident to police, and Quinn was charged with two felony counts of official oppression. The school district reportedly placed Quinn on administrative leave pending the outcome of the court case.

So apparently the way a traffic stop plays out can come down to the luck of the draw. It's too bad for good cops everywhere that sometimes that draw is a wild card.

This article originally appeared in the January 2015 issue of the ABA Journal with this headline: "Traffic Stop Roulette: Sometimes motorists get lucky, sometimes they don't."