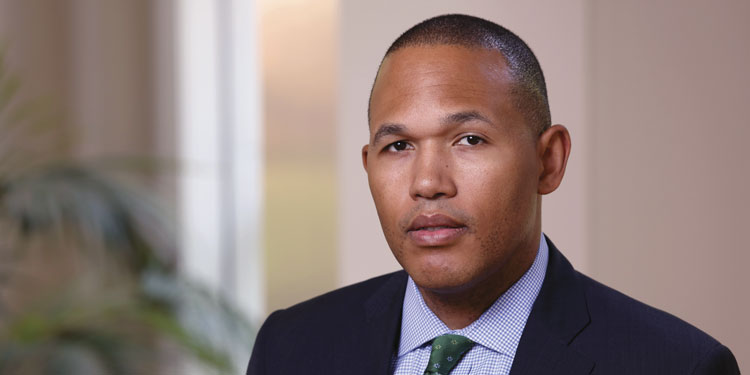 A. Benjamin Spencer: “To be asked to take over volumes from Arthur Miller, one of the original people who created this, was a big honor, particularly in light of the fact that I was his student.” Photo courtesy of Spencer.

A. Benjamin Spencer has always been a proceduralist’s proceduralist, magnetically drawn to the intellectual intricacies of civil procedure. Already a well-respected scholar, Spencer’s influence in the field grew significantly in the past year.

The civ-pro pro has been tapped to annually update a portion of the influential, multivolume Federal Practice and Procedure guidebooks. Chief Justice John G. Roberts Jr. also appointed Spencer to the Advisory Committee on Civil Rules of the Judicial Conference of the United States in May.

Spencer’s love of civil procedure started in law school. He says he received his highest marks at Harvard Law School in the subject and learned from one of the very best: Arthur Miller, now a professor at New York University School of Law and one of the original co-authors of Federal Practice and Procedure.

“Being [Miller’s] student really laid the groundwork for all of this,” Spencer says. “I loved it so much from him that I decided to teach it.”

“To be asked to take over volumes from Arthur Miller, one of the original people who created this, was a big honor, particularly in light of the fact that I was his student,” Spencer says. “It’s a big responsibility. It’s cited by thousands.”

“He was a diligent student; he clearly had a love of law school,” Miller says. “Then he becomes an academic, and I start reading the stuff he is writing on pleadings—a subject I know a great deal about. It turns out he’s exceedingly prolific. He struck me as the perfect person to add to the treatise.”

The volumes of Federal Practice and Procedure are updated annually with a “pocket supplement,” and every so often, those are combined into a new hard-copy edition, which Spencer will produce in 2019. “The book needs to be revised, so intervening updates can be combined into a new book,” he says. That’s because at a certain point, “the physical book no longer reflects the state of the law.”

Miller says he’s delighted that Spencer is taking over the pleadings and motions section. “He will keep those volumes in tip-top shape, both in content and accuracy,” Miller says. “I am a person of years, and it was appropriate for me to release some of my responsibilities.”

Spencer’s appointment to the advisory committee, effective Oct. 1, came about from nominations from various people without him knowing about it. “You don’t apply for this committee; it just happens,” Spencer says. “The committee is dominated by judges but typically has one law professor.”

When he begins that role, Spencer will be one vote on a 13-person body that amends the rules of civil procedure, one of five such committees of the Judicial Conference to which the U.S. Supreme Court, which has the ultimate responsibility, has delegated this function. He will serve a three-year term and will be eligible for a second three-year term, which most committee members end up serving. The committee has hearings around the country, makes decisions on how to amend the rules, and forwards those to the Supreme Court for its approval, Spencer says.

Miller, a former member of the advisory committee, did not have a hand in selecting Spencer but thinks his protégé will be well-suited for such an important role. “If I were grading him, I would give him an A-plus,” Miller says.

This article appeared in the September 2017 issue of the ABA Journal with the headline “A Natural Successor: University of Virginia professor takes over part of civil procedure guidebooks, joins Supreme Court committee."