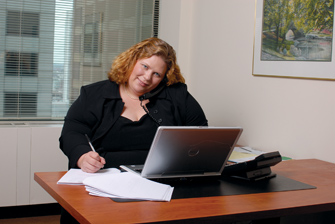 When Michelle Rozovics opened her solo practice last September, she struggled to decide whether to put her office near her suburban Chicago home or in the famous Loop.

Rozovics looked in both places. Most of what she found in the city was either unsuitable for her practice or way out of her budget. She ended up with an office near her Crystal Lake home, some 50 miles from downtown. Rozovics, who runs a niche practice in international law and business, was afraid that she might lose clients unimpressed by her suburban address.

“When I do litigation, I get contacted by companies from out of state. But when they’d see Crystal Lake, they’d say, ‘Where is that?’ ” she says.

So Rozovics decided to keep looking for a suitable space in the big city. And then she found just what she needed: a virtual office.

Rozovics uses a virtual office from Regus, one of a growing number of such providers sprouting across the country.

Some have offices in several cities, while others have just one site. Rozovics’ deal with Regus is typical of large providers. Customers can use their allotted hours in any of the company’s offices anywhere in the world. So those who travel on business can use office time in another city.

For about $200 a month, Rozovics gets 16 hours of office time. She uses a downtown suite, where she has telephone, Internet, photocopy and fax access. Re­cep­tion­ists greet her clients who come to see her there. The same receptionists answer a city telephone number for Rozovics even when she’s not there, and they will put the calls into voice mail or transfer them to her home office line, at her direction. The virtual office company also accepts mail and other deliveries.

For a small additional fee, Rozovics can rent conference rooms by the hour as well.

Since she can use her time in half-day increments, Rozovics generally goes downtown one day a week, often the same days she has court. She can meet clients, conduct depositions or simply work on her laptop.

Best of all, the building where her virtual office is located is steps from the station for the regional rail service, Metra, so she can take the train and avoid traffic.

Denver solo T.A. Taylor-Hunt likes convenience, too. The building that houses her virtual office on Cherry Creek Drive offers free valet parking in a nearby garage—a real perk in the congested city.

Taylor-Hunt practices primarily estate planning and elder law, and she works mostly from her home. But 15 hours a month, she meets clients at her virtual office, which provides most of the same amenities as Rozovics’ but is run by a local firm, the Board­room at Cherry Creek. She pays about $260 a month.

“It’s a professional address, a professional appearance. It lends an air of credibility to my practice that I think impresses my clients and puts them at ease,” Taylor-Hunt says.

She also likes the fact that the virtual office allows her to keep clients at arm’s length. She doesn’t like the idea of having clients come to her home, especially for an initial consultation, but the cost of a full-time office space would be prohibitive.

“I like to meet them at the Cherry Creek office, talk about things and get the ball rolling. Then, once I have drawn up their documents, we can meet there to sign things. Everything in between is done by phone and e-mail,” she says.

Taylor-Hunt also does pro bono work through a local legal aid office, and she takes pleasure in seeing the relief on those clients’ faces when they meet her at the impressive surroundings of her virtual office.

“It’s like they’re thinking, ‘I may have got her free, but she’s still a real lawyer.’ ”