War of the Words: Scalia and Posner Are at It Again 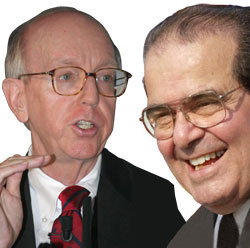 Photos of Justices Posner and Scalia by AP and Getty Images (respectively).

As the legendary sportscaster Howard Cosell might have put it: The year has witnessed a pageantry of pugnacious pugilism.

There was Obama vs. Romney, the Tigers vs. the Giants, Clint Eastwood vs. the Empty Chair. And let’s not forget the judiciary undercard between Judge Richard Posner of the 7th U.S. Circuit Court of Appeals at Chicago and SCOTUS Justice Antonin Scalia that began when the esteemed jurist took a jab at Scalia’s dissent in Arizona v. U.S., followed by a quick uppercut to the justice’s book Reading Law, which Scalia wrote with Bryan A. Garner.

SCALIA: “To say, as the court does, that Arizona contradicts federal law by enforcing applications of the Immigration Act that the president declines to enforce boggles the mind.” –Arizona v. U.S., decided June 25

POSNER: “These are fighting words. … It wouldn’t surprise me if Justice Scalia’s opinion were quoted in campaign ads. The program that appalls Justice Scalia was announced almost two months after the oral argument in the Arizona case. … The suggestion that illegal immigrants in Arizona are invading Americans’ property, straining their social services, and even placing their lives in jeopardy is sufficiently inflammatory to call for a citation to some reputable source of such hyperbole. Justice Scalia cites nothing to support it.” —Slate, June 27

SCALIA: “He’s a court of appeals judge, isn’t he? He doesn’t sit in judgment of my opinions as far as I’m concerned. … It’s fun to push buttons. When Richard Posner comes out with a statement like that, I should come out with a statement equally provocative.” —Bloomberg News, July 30

POSNER: “How many readers of Scalia and Garner’s massive tome will do what I have done—read the opinions cited in their footnotes and discover that in discussing the opinions they give distorted impressions of how judges actually interpret legal texts? … Justice Scalia has called himself in print a ‘faint-hearted originalist.’ It seems he means the adjective at least as sincerely as he means the noun.” —“The Incoherence of Antonin Scalia,” on The New Republic’s tnr.com, Aug. 24

SCALIA: “To say that I used legislative history is simply, to put it bluntly, a lie. …You can get away with it in The New Republic, I suppose, but not to a legal audience. … We are textualists. We are originalists. We are not nuts.” —Thomson Reuters News & Insight, Sept. 18

POSNER: “Responding to a Supreme Court justice who calls one a liar requires special care in expression. … He may not consider such a historical inquiry to be an exercise of ‘legislative history,’ because he defines legislative history very narrowly (and in the interview calls it ‘garbage’). … Even if I accepted Scalia’s narrow definition of legislative history and applied it to his opinion in Heller, I would not be telling a ‘lie.’ ” —Thomson Reuters News & Insight, Sept. 20