What Women Lawyers Really Think of Each Other

Would women lawyers prefer to work with men or other women? The answer may depend on the age of the female lawyer you’re asking, an ABA Journal survey has found.

Of more than 1,400 respondents who answered the question, 58 percent said the gender of their colleagues made no difference, while 42 percent expressed a preference for working either with men or women.

But younger female attorneys who are following in the footsteps of that trailblazing generation don’t hold their older colleagues in such high regard. Among female lawyers under 40 who thought gender matters, 58 percent said male supervisors give better direction, give more constructive criticism (56 percent) and are better at keeping confidential information private (64 percent).

A total of 4,449 individuals who identified themselves as female attorneys answered all or part of the survey. The survey was co-authored by Linda Marks, director of the Center for WorkLife Law at the University of California’s Hastings College of the Law in San Francisco.

Why do opinions about the role of gender in the workplace depend on the age of the female attorney?

Some experts cite generational tension: Female lawyers entering the profession often don’t want to make the same personal sacrifices as their predecessors, and they question whether such sacrifices are even necessary to succeed. Senior women may not understand this mindset, much less realize that the playing field has changed, experts suggest. And that can block useful dialogue.

Rikleen says female partners often tell her that there will always be associates who, like themselves, will sacrifice their personal lives for successful careers. But she says younger men are also less willing to make the personal sacrifices of their predecessors.

“It’s not purely gender-based,” says Rikleen, a member of the American Bar Association’s Commission on Women in the Profession. “That says to me that if I’m a leader of a workplace, I need to think about what’s happening here in the future—and how to position this place.”

When Rikleen talks to younger women lawyers, she says, they’re often relieved that she understands their complaints. Women closer to her age are often surprised that she doesn’t share their perspective.

Arin Reeves, a Chicago lawyer who focuses on diversity consulting, also sees differing views between women younger than 35 and those older than 45. She mentions that when female partners develop a women’s initiative, the female associates generally don’t find it useful.

“There’s no such thing anymore of all the women being in the same boat, who need a particular set of strategies to be kept afloat. Now that women have a lot more models to choose from, they are becoming more selective as to which women they identify with.”

Women can be one another’s best advocates, but senior women lawyers need to understand that younger women can build careers differently, says Deborah Epstein Henry, an attorney who advises law firms on the retention and promotion of female lawyers. And younger women, Henry says, need to think about how they can have better relationships with senior female lawyers.

“They don’t have to be a role model in every capacity, but the junior women can select different things from different people,” Henry says. Her company, Flex-Time Lawyers, has chapters in New York City and Philadelphia, where members meet to network, share information and effect change in the workplace. “I really do believe that women need to move away from placing judgment on other women,” she says, “and accept more diversity among ourselves.”

The ABA Journal and ABAJournal.com invited female lawyers to respond to a Web-based survey regarding their workplace experiences; the survey was open from May through July last year. The 4,449 who responded in this self-selecting survey were asked whether they perceived gender-related differences in workplace performance and behavior.

The end of the questionnaire offered those surveyed the opportunity to share their thoughts or experiences anonymously. More than 600 did so, and selections from their comments appear throughout this article. 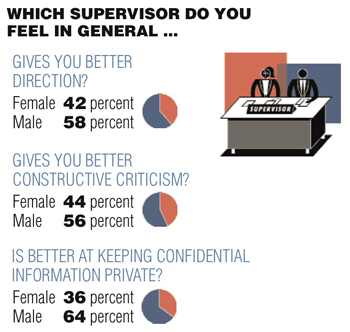 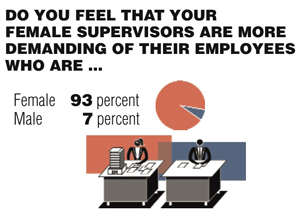 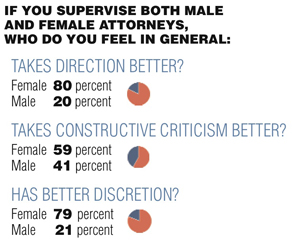