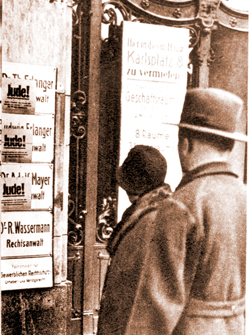 Some 70 years after its horrors unfolded, the Holocaust still has stories to reveal and lessons to share.

Aaron Schildhaus of Washington, D.C., encountered some of those stories in September, shortly after ending his term as chair of the ABA Section of International Law. He was in Berlin for the 50th anniversary of the German Federal Bar when he visited an exhibit presented by the bar. “Lawyers Without Rights: Jewish Lawyers in Germany Under the Third Reich” depicted the collapse of a vibrant professional community under Nazi persecution.

“It’s a graphic historical demonstration of the need to protect lawyers around the world—and what happens when nobody does that,” Schildhaus says. “There’s a lesson for everyone everywhere.”

Since the exhibit was created more than a decade ago, it has been presented in more than 80 cities, mostly in Europe. But it was never made available to an audience of lawyers in the United States, and Schildhaus was determined to change that.

As a result of his efforts—and with support from the German Federal Bar and ABA officials—“Lawyers Without Rights” will be presented April 13-17 at the annual spring meeting of the International Law Section in New York City. After that, the exhibit will be featured Aug. 5-10 at the ABA Annual Meeting in San Francisco.

The idea for the exhibit was conceived in 1998 when an Israeli lawyer asked the regional bar of Berlin for a list of Jewish lawyers whose licenses had been revoked by the Nazi regime. “The regional bar decided not only to research a list of names but also to try to find out more about the fates behind all those names,” says Axel Filges, president of the German Federal Bar. “Some were able to leave the country after the Nazis came into power, but very many of them were incarcerated or murdered. The non-Jewish German lawyers of those days remained silent. They failed miserably, and so did the lawyers’ organizations. We do not know why.”

After the Berlin bar transformed its research into an exhibit, other regional bars began asking whether they could show it and add their own research. “So, like a puzzle, a portrait of the fate of Jewish lawyers in Ger many has emerged step by step,” says Filges, whose bar eventually became the exhibit’s overall sponsor.

A COMMUNITY UNDER ATTACK

The exhibit portrays the collective fate of Jewish lawyers in Nazi Germany by focusing on the stories of 15 individual lawyers.

Some, like Max Kowalski, survived the Holocaust because they were able to flee. Kowalski, who practiced copyright and publishing law in Berlin, spent time in the Buchenwald concentration camp before fleeing to London in 1939, but he never practiced law again. Until his death in 1956, Kowalski supported himself primarily as a piano tuner, singing teacher and choir member.

For others who found their personal and professional lives crushed by the Nazis, the end came through suicide. Moritz Galliner, a Berlin lawyer who had sent his children to safety overseas, committed suicide with his wife on the eve of their own deportation from Germany.

The lessons from the stories of those lawyers have not lost their urgency today, says Glenn P. Hendrix, who currently chairs the International Law Section.

“Jewish lawyers were a substantial percentage of the legal profession in Germany, and even they were without rights when the Nazi regime came in,” says Hendrix, managing partner at Arnall Golden Gregory in Atlanta. “It’s a lesson that has implications for today: What happens when the rule of law is trampled by the state?”

The print version and initial online versions of "When Lawyers Disappeared," April, should have included the following photo credit: BArch, Bild 146-1973-074-87 / o.Ang.