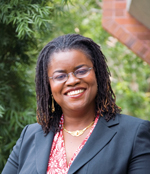 I remember the moment I told my father I wanted to be a lawyer. It was a typi­cally humid June day in New York City, and through the open window of our apartment could be heard all the sounds of summer: the gush of water escaping from an open fire hydrant, the blaring horns of ever-impatient mo­tor­ists, and the occasional snippet of conversation from the old men gathered on the stoop outside. But in our tiny, cramped kitchen there was only silence.

“Why?” my father finally asked.

Family legend has it that I responded, “Because I want to be the international Thurgood Marshall.”

Perhaps. My career has been a (modest) homage to the late, great justice in that I, too, focus on issues of fairness and equity in my work as a trade and development specialist. As I grow older, I find myself less concerned with my answer, however, and more fascinated with my father’s question: Why?

At the time, I did not fully comprehend what he was asking—I was only 9 years old. Like a Zen koan, more is revealed each time I explore the question.

My father came of age during the “Papa Doc” Duvalier regime in Haiti, a time in which lawyers faced persecution, kidnapping and even death. Why would I aspire to a profession that pitted a single individual against the all-powerful state? Why would I contemplate membership in an organization whose ethics call for representation of the accused, the unpopular, the poor and the dissident? Why would I participate in a system that either corrupts or kills?

My father’s experience of law, lawyers and the legal profession is vastly different from my own. As an American attorney whose closest bout with danger was a pulse-pounding (but ultimately uneventful) trip to Algeria, I am not often called upon to risk life or limb in service to my profession.

Like so many others, I recoiled in horror last November as Pakistani lawyers faced down batons, tear gas, barbed wire and other implements of autocratic rule to protest the government’s manipulation of the judiciary. My first uncensored thought was “Why?” Why would these lawyers stage protests at local courthouses knowing they would be clubbed, beaten and jailed? Why would they risk their safety, their families and their careers to object to the firing of a single judge?

As I contemplated the actions of my comrades in law, I finally came to understand the true nature of my father’s question: Why choose a profession that eschews security in favor of a life lived holding authority figures accountable under the law?

It is a task that will often prove risky—and not just in “exotic” locales across the world. The lawyer who forces the prosecutor to prove her case when society has already found a murder suspect guilty faces public scorn. The lawyer who battles the U.S. government all the way to the Supreme Court to ensure those charged with terrorist acts have access to courts and justice risks public opprobrium. But we the lawyers do these things anyway.

I sometimes wish I could go back in time—back to that summer day in June in New York City. If I could face my father’s question all over again, here is what I would say: “Why? Because the legal profession is the greatest profession in the world. In the process of doing our jobs, we secure freedom for everyone else.”

Marjorie Florestal is an associate professor at the University of the Pacific McGeorge School of Law in Sacramento, Calif.