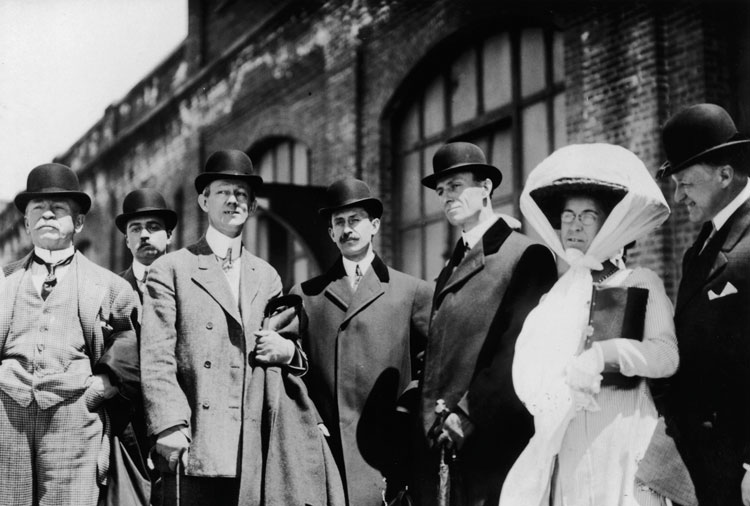 Photo of Orville and Wilbur Wright by Hulton Archive/Getty Images

On Dec. 17, 1903, beginning at 10:35 a.m., the Wright brothers, Orville and Wilbur, piloted four motorized flights ranging from 120 to 852 feet across a stretch of beach near the town of Kitty Hawk, North Carolina.

Reports of their accomplishment raised only mild public interest, but the brothers seemed not to mind. They returned to their native Dayton, Ohio, continued their experiments there without fanfare—100 flights in 1904, Wilbur later testified—and worked toward securing patents.

In Europe, the news was received with equal parts enthusiasm and skepticism. Octave Chanute, a retired civil engineer and aviation historian who had occasionally advised the Wrights, used a lecture tour across Europe to recount the Kitty Hawk flights and their pioneering nature.

By the end of 1904, with patents in Britain and France and pending in Germany, the Wrights barnstormed Europe. They sold licenses to manufacturing firms, lobbied governments to purchase planes and arranged fee structures for aviation exhibitions.

It wasn’t until 1906, after several rejections, that the Wrights were awarded a U.S. patent for their controlled heavier-than-air “flying machine.” Patent No. 821,393, issued May 22, 1906, outlined 18 innovations to control pitch, yaw and roll—hitherto obstacles to propeller-driven flight.

But even with patented technology, the U.S. reception for the Wrights and their invention remained underwhelming. Over the next two years, investors, government officials and even the press showed only nominal interest.

Enter Glenn Curtiss, motorsports racer and manufacturer of motorcycle engines. In 1907, the Aerial Experiment Association, an organization formed by Alexander Graham Bell, recruited Curtiss to help pursue a cash prize for extended flight that was offered by Scientific American. In an aircraft built with the Wrights’ consent, Curtiss won the prize. But in the process, he decided to enter the business of building flying machines himself.

In March 1909, Curtiss formed the Herring-Curtiss Company with Augustus Herring, an aviation enthusiast who claimed to hold aeronautic patents that predated the Wrights’. But by August 1909, Herring-Curtiss was facing a patent infringement lawsuit filed by the Wright Co. in a New York federal court.

In defending himself, Curtiss directly challenged the Wright brothers’ patent, arguing their breakthrough had depended on the earlier work of others—work later described by a Wright expert witness as “a scrap-pile of failures.” Judge John Hazel wasn’t buying it. In January 1910, he granted an injunction against Herring-Curtiss. Although the injunction was lifted a few months later, the appellate opinion appeared to endorse Hazel’s initial conclusion: that the Wright brothers’ flying machine was a “pioneering” invention.

Despite their early win, their aggressive use of litigation tainted the Wrights’ reputation. Allies such as Chanute, disappointed that their patent wasn’t placed in the public domain, became openly critical. In January 1910, Wilbur wrote Chanute that “jealousy and envy” had precluded monetization of their invention: “You apparently concede to us no right to compensation for a solution of a problem ages old except as granted to persons who had no part in the invention.”

For three years, Curtiss and the Wrights slogged through the trial court before Judge Hazel reiterated his original judgment. The Wrights, he concluded, were “pioneer inventors in the aeroplane art.” And when the New York City-based 2nd U.S. Circuit Court of Appeals affirmed Hazel’s judgment on Jan. 13, 1914, the Wrights’ invention became a matter of fact.

The litigation, however, had taken a toll on both sides. Wilbur died of typhoid in 1912 at age 45, his health undermined by the stress. Curtiss discovered Herring had lied about holding prior patents. And on the cusp of war, European advances in aviation all but ignored the Wright patent interest.

In 1917, as the U.S. entered World War I, Congress pressured the Wright and Curtiss companies to join the Manufacturer’s Aircraft Association as part of an aviation patent pool that endured long after the war. By then, Orville had sold his interest in the Wright Co., and Curtiss had continued manufacturing as the Curtiss Aeoroplane and Motor Co. In 1929, the two companies merged as the Curtiss-Wright Corp.