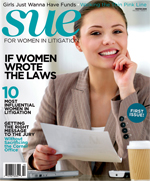 When Chere Estrin, the publisher of Know, a magazine for paralegals, was doing research for a story she came across innumerable statistics and articles about female lawyers.

“It was the same old, same old,” Estrin recalls. “Three issues were covered: unequal pay, child and family challenges, and not making partner.”

The Studio City, Calif.-based publisher realized she kept hearing the same complaints “but no resolution. The time,” she decided, “had come.”

Though her small company “didn’t have two nickels to rub together,” Estrin decided to create a magazine for women who are litigators. The cleverly titled Sue is scheduled to debut this month. The mission, according to Estrin, is to abolish stereo­types and acknowledge strengths of female litigators.

Sue’s inaugural edition will feature how-to articles on issues like confronting your case’s weaknesses, soft-skill topics like where are the female litigation bloggers, and profiles of powerful women who have crashed through the glass ceiling.

Sue will be published bimonthly. Though Estrin plans to gear future publications toward other specialties, she focused on litigation because it’s at the heart of what most women lawyers practice.