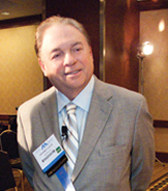 It was just one moment in a hallway outside another hotel meeting room, but it offered a telling glimpse into the impact Stephen N. Zack is likely to have when he takes his turn as ABA president.

He was giving an interview to a television crew on a Friday morning during the ABA Annual Meeting in Chicago. The crew was from the Spanish-language television network Telemundo, and Zack was comfortably doing the interview in Spanish.

Zack is fluent in Spanish because it is a language of his childhood. He grew up in Cuba, the son of a Cuban mother and a father whose roots were in Russia. Zack’s family fled the Castro regime in 1961, when he was a teenager, and settled in Miami.

A partner at Boies, Schiller & Flexner in Miami, Zack will become the ABA’s first Hispanic-American president at the close of the 2010 annual meeting. ABA presidents serve one-year terms.

In an interview with the ABA Journal, Zack said his background will help bolster the ABA’s outreach to a growing minority community that is starting to flex its political and economic muscle but also has many serious legal concerns.

“The Hispanic community is the largest and fastest-growing immigrant group in our country,” Zack said, “and the ABA has not traditionally focused on that community’s issues. To have a Hispanic-American president who has lived through the immigrant experience says, ‘We know you’re there, and we will be part of the solution of your problems.’ ”

The president-elect said he plans to appoint a commission that will work with other groups to address legal issues facing the Hispanic community. Among those concerns are immigration, voting rights, access to interpreters and other language assistance in the courts, and juvenile justice services.

But Zack said the commission’s efforts will benefit people outside the Hispanic community as well. “If you address the problems of one minority group,” he said, “you’ve addressed the problems of others.”

Zack also proposed that the ABA cre­ate a program of civic education that he called the American Bar Acad­emy. He said the program would take place in high schools nationwide over the course of the Presi­dent’s Day weekend.

Schools will be asked to select 30 students—half of them minorities—to participate. They’ll be taught by lawyers in their area, using a curriculum designed by the ABA and other legal groups, covering “everything from My Cousin Vinny to the Bill of Rights,” he said.

In his Telemundo interview, Zack focused on the ongoing problem of fraud by notarios (notary publics), who often hold themselves out in Hispanic communities as experts on immigration laws and proce­dures, even though they have min­imal training and expertise.

Many immigrants assume that notarios in the United States have the same formal status that they do in most Latin American countries. The ABA Commission on Immigration has stepped up efforts to address the problem in conjunction with other organizations.

“It’s an issue that’s been under the radar for a long time,” Zack said. “Too long.”