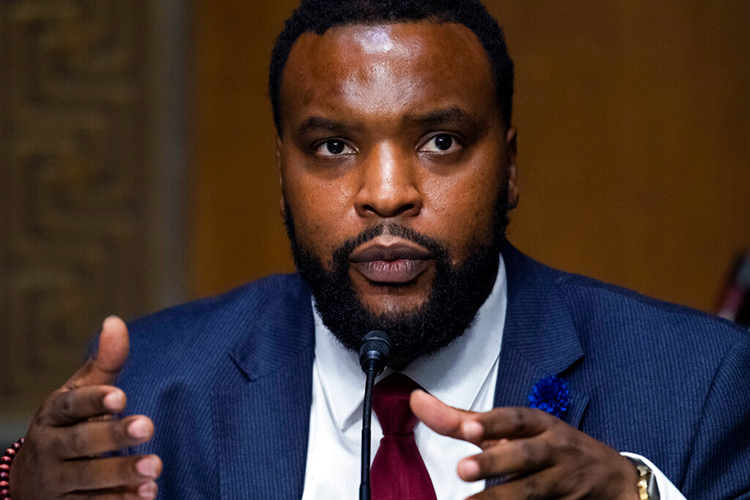 If elected, Lee Merritt would be the first Black person to serve as Texas attorney general. (Tom Williams/CQ Roll Call/Pool via AP File)

Civil rights attorney Lee Merritt announced Tuesday that he will run for Texas attorney general, a position currently held by Republican Ken Paxton. The Dallas-area Democrat, who has become well known for representing families of Black men and women who have died in officer-involved shootings, wrote on Twitter that he has watched the “country silently stand by and support the deadliest police culture in modern history” and he was running for attorney general “because reform has to start at the top.” Merritt would be the first Black attorney general in Texas if elected. (The Dallas Morning News, the Texas Tribune, CNN, Newsweek)

A divided three-judge panel of the 4th U.S. Circuit Court of Appeals at Richmond, Virginia, found on Tuesday that prohibiting the sale of handguns to adults under 21 is unconstitutional. Natalia Marshall brought the lawsuit after a licensed firearms dealer refused to sell her the gun she wanted as protection against an abusive ex-boyfriend. She was 18, and at the time, a 1968 federal law prevented 18-, 19-, and 20-year-olds from purchasing handguns. Judge Julius Richardson wrote in the 4th Circuit’s opinion that this age group is protected by the Second Amendment. “Our nation’s most cherished constitutional rights vest no later than 18,” he said. “And the Second Amendment’s right to keep and bear arms is no different.” (The Washington Post, the Hill, Courthouse News Service, July 13 opinion)

It was a crime to get a haircut or a fresh shave in New York on a Sunday—until this week, when Gov. Andrew Cuomo signed legislation repealing the 1920s law. At the time, the ban on Sunday barbering joined other laws, such as a ban on Sunday alcohol sales, that aimed to make time for religious worship. Violators of the misdemeanor law faced up to a $5 fine for their first offense and up to a $25 fine and 25-day stay in jail for their second offense. “This is the very definition of an archaic and meaningless law that makes little to no sense in the 21st century,” Cuomo said in a statement published in the New York Daily News. “While not routinely enforced, I’m more than happy to sign this repeal into law and allow these businesses to determine what days they choose to operate.” (New York Daily News, Syracuse.com, Courthouse News Service)