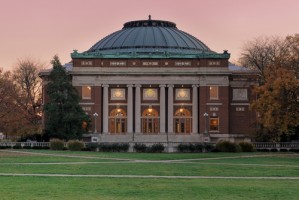 Petitions for “sanctuary campuses” are being circulated at the University of Illinois at Urbana-Champaign and other schools.

In light of president-elect Donald Trump’s campaign promise to increase deportations, some college students and faculty members are calling on their schools to declare themselves “sanctuary campuses” that would limit their cooperation with federal immigration enforcement authorities.

Whether the policies would be meaningful—or jeopardize a school’s federal funding—is unclear, immigration lawyers told Inside Higher Ed. The article notes that Trump has frequently spoken about repealing the Deferred Action for Childhood Arrivals program, which gives immigrants who came to the United States without documentation as children temporary relief, including the right to work. He’s also threatened to revoke funding for sanctuary cities, which the sanctuary campus idea draws on.

There are some things that could be done to establish sanctuary campuses, said María Blanco, the executive director of the University of California Undocumented Legal Services Center. She mentioned denying U.S. Immigration and Customs Enforcement officers access to campus without a warrant, unless there was an “exigent circumstance.”

None of those policies would jeopardize a university’s federal funding, according to Blanco.

But they could jeopardize safety, according to Jessica Vaughn. Her organization, the Center for Immigration Studies, advocates limiting immigration.

“If there is someone who is a problem on campus, let’s say potentially there’s an individual that the FBI and ICE are aware is involved in terrorism, and maybe planning a terror attack, and in the course of their investigation they want to find out what kinds of things the student has access to, or what the class schedule is or something that, in furtherance of an investigation that could save lives, I would hope that university authorities would see this clearly and see the need to not just have a blanket prohibition on giving information to immigration authorities,” Vaughan said.

She added that if a university is obstructing federal law, it should be denied federal funds.

Some question how much legal weight a university sanctuary policy would carry.

“I think it will make campus administrators more hesitant to contact immigration officials, but if immigration officials say, ‘We’re looking for a specific student,’ I’m not sure that a sanctuary resolution will necessarily bar the campus from cooperating if they have to,” Stephen Yale-Loehr, a professor of immigration law practice at Cornell University Law School, told Inside Higher Ed. “… at the end of the day an immigration official can always get a warrant if necessary.”

The University of Wisconsin at Madison said in a written statement that the chancellor doesn’t have the authority to declare a campus a sanctuary, and must operate the university within the limits of federal and state law, as well as policies established by the school’s board of regents.

The statement noted that neither university police or the Madison Police Department collect immigration or citizenship documentation from individuals when they have interactions.

“We have no plans to change this practice. However, University of Wisconsin Police Department and Madison Police Department officers have full authority from the state Legislature to enforce laws and applicable rules on campus without seeking permission of the university,” the statement read.