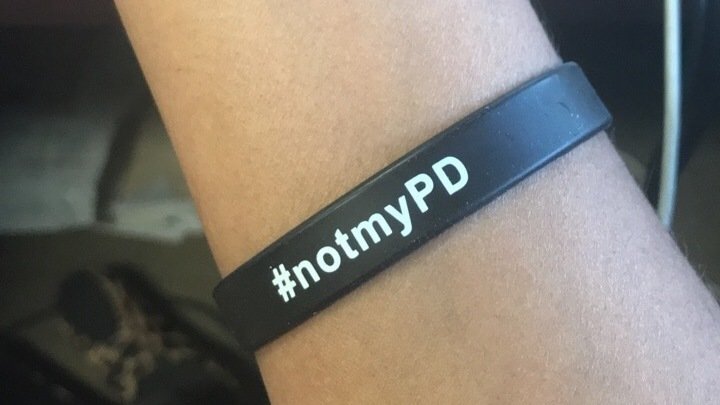 Image from a change.org petition asking the Los Angeles County Board of Supervisors to remove Nicole Davis Tinkham as interim public defender.

Pitting themselves against the government agency that oversees their office, a group more than 150 Los Angeles County public defenders staged a protest Monday against their new interim chief.

The Los Angeles Times has a story.

The protesters say the new interim public defender, Nicole Davis Tinkham, is not qualified for her job because she has never tried any criminal case. Deputy Public Defender Alisa Blair says that would put Tinkham at the entry level if she were an ordinary new hire.

“For her to have that level of qualification and then be put to the actual title of public defender is offensive,” says Blair, who joined the department in 2003, straight out of law school. “She doesn’t have the specific knowledge.”

Deputy public defenders are also concerned about some of the work history Tinkham does have: defending Los Angeles County sheriff’s deputies from excessive-force lawsuits, first in private practice and then with the office of the county counsel. They say that background could hurt their ability to build trust with clients, who are often nervous about working with employees of the same government that’s prosecuting them. About 390 of the office’s 650 deputy public defenders signed a letter outlining those concerns before her Jan. 23 appointment, and a petition on change.org, posted under the name of a deputy public defender in the office, demands Tinkham’s removal.

The protest was held at lunchtime Monday, a day when the Los Angeles Superior Court was closed. Deputy Public Defender Christine Rodriguez says that timing was chosen to avoid interfering with the public defenders’ work. Alameda County Public Defender Brendon Woods spoke in support at the rally, saying he was outraged by the appointment. The effort also has the support of public defender Jeff Adachi of San Francisco and the ACLU of Southern California.

The Los Angeles County Board of Supervisors, which made the appointment, did not respond as a body to the ABA Journal’s request for comment. But Supervisor Sheila Kuehl, a Democrat representing western parts of the county, told the ABA Journal that the board was responding to complaints it heard from individual public defenders about how the office is run.

“There were a series of exams and there were complaints that they were not scored correctly. Or that people were being transferred kind of arbitrarily,” says Kuehl, an inactive attorney and former child actor. “We wanted her to take a deep dive into the management piece of it and really see what was holding this office back.”

Kuehl notes that Tinkham’s appointment is for six months, and the board is already in the process of hiring a search firm. Because the board knew Tinkham’s lack of criminal law background would raise questions, she says Tinkham will bring along colleagues from the county counsel’s office who are former public defenders.

Blair agrees that there were management problems under past leadership, but doesn’t believe the board is offering any kind of solution.

A spokeswoman for the public defender’s office says it has no official statement on the matter. Tinkham did not respond to a request for comment made last week, but issued a statement Monday saying she’s confident that her experience in employment law will help solve “a number of pressing managerial and workplace issues.”

Tinkham replaces Interim Public Defender Kenneth Clayman, who replaced another interim leader. The office’s last permanent leader was Ron Brown, who retired in late 2016. The Los Angeles Times reported in January that the permanent job was offered to two different candidates in 2017, but both turned it down for personal reasons.

Tinkham comes to the position from a job as senior deputy county counsel in the government services division. Prior to that, she was a partner at the California law firm of Collins Collins Muir + Stewart, where she started her legal career in 2003. She attended Southwestern Law School.