Victims are taking on websites for posting photos without their consent 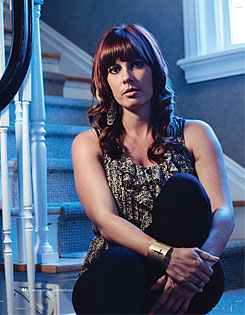 Hollie Toups—“I felt like my life was over. …In public, people were approaching me. They had seen me naked.” Photo by Josh Huskin.

In the summer of 2012, Hollie Toups got a disturbing call from a friend. Toups is from a small town near Beaumont, Texas, where nobody is that much of a stranger. Her friend had overheard some men talking about a pornographic website with local women on it—and they had mentioned Toups.

Toups couldn’t imagine how a stranger could get naked pictures of her. But it was true: Her pictures were on Texxxan.com, a website she’d never heard of until that day. Some were self-portraits she had taken six years earlier for an ex-boyfriend; another was taken to track the progress of her weight loss efforts. The page also listed her real name, Facebook page and more personal information.

Word got around quickly in her small community.

“I felt like my life was over,” she says. “I was being harassed on Facebook; people were sending me messages of solicitation; in public, people were approaching me. They had seen me naked, so they felt like they knew me and assumed I wanted that kind of attention.”

Toups doesn’t blame her ex-boyfriend. Because she never shared the weight loss photo with anyone, she believes she was hacked.

But when Rebekah Wells of Naples, Fla., found nude pictures of herself online, she quickly traced them to ex-boyfriend David Avedisian. All of the women posted with her had dated or worked with Avedisian, she says.

“When you have your pictures up like that, you don’t know who’s seen them and who hasn’t,” says Wells, a student at Florida Gulf Coast University. “Every time I walked into a classroom, I thought, ‘Has the professor seen them? Is he going to Google me?’ ”