A life of legal firsts—including romance and marriage 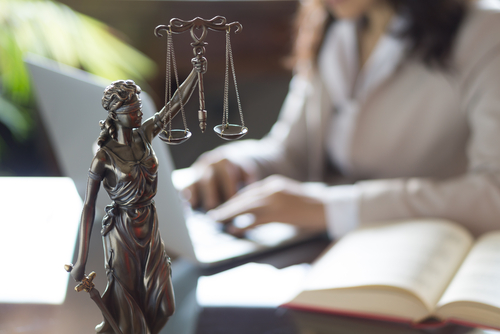 I graduated from Columbia Law School in 1945, 20 years before the Civil Rights Act made it illegal to discriminate in employment on the basis of sex. Although some eastern law schools—Yale and Columbia, but heavens, not Harvard—already admitted women, female graduates couldn’t expect to be recommended as law clerks to sitting judges, no matter how well their records stacked up against their male classmates.

Being a law clerk was, and still is, a dream job. Back then, each judge had only one clerk—the chief justice of the U.S. Supreme Court was entitled to two. Clerks really got to know and work with their own judges and often the other judges on the court. They worked long and hard but earned the princely sum of $2,400 per year compared to the paltry $1,800 paid to first-year associates by prestigious New York law firms. And a clerkship on a well-regarded court was a sure path to desirable future employment.

So there I was, Carmel Prashker, in the spring of 1945, 21 years old (a product of the New York City school system’s hurry-up philosophy of education and wartime ‘round-the-calendar university scheduling), nearing graduation and contemplating the practical limits of my rather casually chosen profession. (My father was a professor of law; my beloved brother was in law school, and I was dating his roommate—remember dating?—so why not go to law school?)

In 1945, the prospects for a female law graduate were pretty dismal. You might be hired to draw up wills in a law firm’s back room, where no client would discover that a woman had done the work, or toil anonymously for some legislative commission, drafting revisions of dusty statutes. So I was delighted to read an article in the Saturday Evening Post by Judge Jerome Frank of the 2nd U.S. Circuit Court of Appeals at New York, opining that women were as intellectually competent as men, and that there was no reason not to hire a woman to do what was traditionally a man’s work.

The 2nd Circuit, which heard appeals from district courts in New York, Connecticut and Vermont, generally was regarded as the best appellate court in the country. Its six members included the famous and uniformly admired Judge Learned Hand; his cousin Augustus Noble Hand (less famous but equally learned and eloquent); Thomas Swan and Charles Clark, both former deans of Yale Law School; and Harrie Chase, a distinguished attorney from Vermont, a specialist in the increasingly important field of patent law and one of the few judges of his day who was really comfortable in the worlds of science and engineering.

And then there was Judge Frank: legal philosopher; former successful practitioner and chairman of the Securities Exchange Commission; unabashed iconoclast; and a man who with his poet wife was simply unable to exist on the relatively modest salary of a jurist on the second-highest court of the land. (Chief Justice John G. Roberts Jr. is still complaining about insufficient pay for federal judges, but Frank somehow suffered more than most.)

To help keep the wolf from the door, he supplemented his often lengthy and controversial legal opinions with short, witty articles on matters unrelated to current court concerns, for which magazines paid happily and well. Having read Frank’s encouraging words, I wrote him a letter describing my credentials and ambitions (newborn after reading his article), and to my astonishment, I received an invitation to come talk to him. It was love at first encounter, and Columbia confirmed that I was qualified to be a law clerk, although it would never have proposed me.

The court heard cases from September through June—during “term time.” Judges vacationed for the summer months, a relic of the days when they literally “rode circuit,” not to mention the absence of air conditioning. In September 1945, I became the first woman to clerk on a federal circuit court and spent the term happily writing memos on legal issues and drafting occasional opinions in cases that really didn’t interest my judge, such as matters involving the collision of two tugs in a New York harbor and arising under maritime law. I put a lot of effort into trying not to blush furiously at Learned Hand’s mildly indecent jokes (I never succeeded, which pleased him to no end), and sometimes sewed on the buttons that often came loose from Frank’s slightly shabby jackets, which his wife never thought to repair. I knew I would never settle for taking dictation, but I couldn’t see any harm in sewing on buttons, which I actually did very well.

Near the end of that first golden year, I again tested the employment waters, with disappointing results. Although I now had Frank’s introductions and endorsement, the war had ended and the veterans had returned. Not even Frank’s good friends could see much reason to hire a woman to do a “man’s job,” although drawing up wills in the back room remained a possibility. Sad and defeated, I reported back to my sponsor, who as usual had a nontraditional solution. Although clerkships normally lasted for one term, we had had a wonderful run, and he suggested that I stay for another. By then, the log jam of job-seeking veterans might have loosened, and maybe, just maybe, hiring a woman might seem less of a leap. Needless to say, I joyfully agreed, and thereby hangs my tale.

My first year of clerking had offered limited romantic possibilities. The war dragged on, and four of the other law clerks were married. The fifth, Judge Chase’s clerk, was mostly in Vermont where the judge resided except when he was actually hearing cases. (The judges sat in panels of three, usually about one week in five.)

But the courthouse was also home to the U.S. District Court for the Southern District of New York and the offices of the U.S. attorney for the Southern District. In my spare time (what there was of it), I dallied with the assistant U.S. attorney in charge of the civil division—an Austrian refugee, a friend of Frank’s 20 years my senior, and with male chauvinist leanings. Frank was mightily amused—and my parents were openly horrified—so of course I stubbornly persisted.

But another force was at work. In those days, judges not only were poorly paid they had no retirement or death benefits. So when U.S. District Judge Frank Coleman died suddenly in 1934, leaving his wife, Marjorie, and two small daughters with very little to live on, those wonderful men, Learned and Augustus Hand, set up a formal Second Circuit law library with Marjorie Coleman as its learn-on-the job librarian. I recall that during the first few years, the Hand cousins paid her salary out of their own pockets but that eventually she was paid from federal funds. 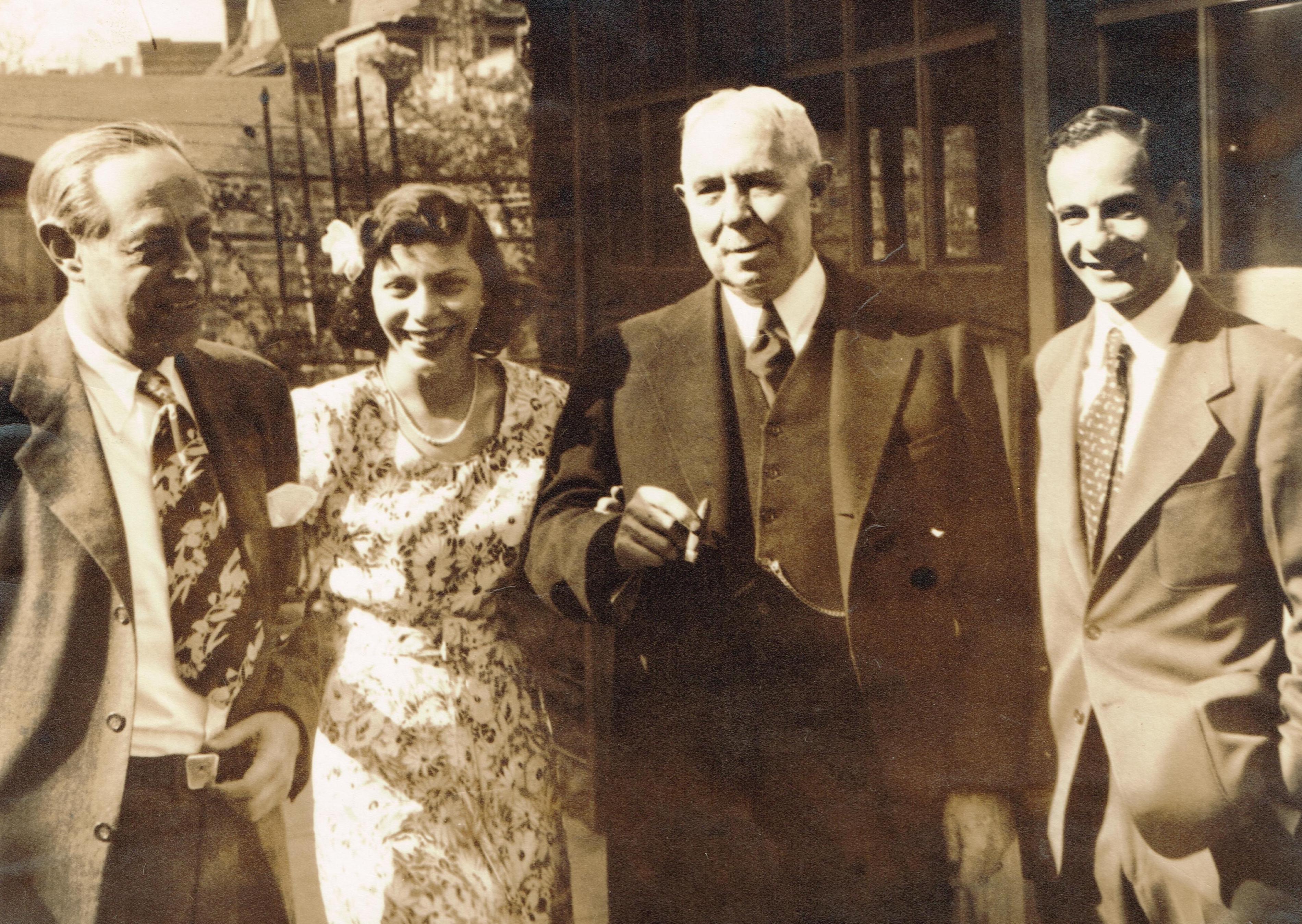 Marjorie Coleman had been delighted by the advent of a female law clerk, but she shared my parents’ disapproval of that assistant U.S. attorney. When a new crop of law clerks arrived in September 1946, she surveyed the field, made her selection and invited us both to tea in her library.

Larry Ebb had recently graduated from Harvard Law School after four years in the Navy. He had been president of the law review, was now Augustus Hand’s law clerk, and was slated to clerk for U.S. Supreme Court Chief Justice Fred M. Vinson the following year. He was thin as a rail (his natural tendency reinforced by four years in the Pacific), smart as a whip, and had a nice dry sense of humor. Tea with Marjorie Coleman led to frequent meetings: in the library (where else should law clerks be?); at conferences when our judges were sitting on the same cases; on Saturdays when judges were home and law clerks were at work; and on the stairs between the 23rd floor, where Judge Frank had his office; and the 24th floor, where the Hands held sway.

We thought we were being very discreet, but this was the first romance between law clerks, and the whole courthouse was greatly entertained. Thankfully unbeknownst to us, there was a pool as to how it would all turn out, in which even our judges participated.

By February, I had concluded that New York remained an employment wasteland and decided to try my luck in Washington. Larry was headed for Washington, and Frank had a lot of useful connections there. Never underestimate the importance of connections.

Still no luck at private law firms. But the federal government had become the employer of first resort for professional women. And thanks to Frank’s introductions, I landed a job with the newly established Atomic Energy Commission, whose general counsel was willing to add a woman with good connections to his still-incomplete legal staff. It was another dream job, and chief among its pleasures was my assignment as counsel to the raw materials division (think uranium), headed by Virginia Jeffers’ father, Jesse Johnson. Yes, it’s a small world.

On my return to New York, I reported my success to Larry, who said, “Well, I guess we should get married.” And I said, “I guess we should,” as though the thought hadn’t previously crossed my mind.

We agreed that sooner was better—like tomorrow or the day after. We already were seeing each other seven days per week: at work, after work and on our precious Sundays off. We saw no reason for a long engagement or for any engagement at all.

My mother had a different view. She had finally realized her lifelong dream of going to law school (everyone else in the family already had) and told us that she’d be ready to plan a wedding after the school year had ended. Would June do?

No, June wouldn’t do. We said that we’d manage the wedding, and she could just come as our guest.

There was another, more serious problem: The unwritten law that no law clerk ever married during term time. Term time was for working, and weddings were for later. But ours was the first law clerk romance, and we petitioned our judges for a waiver. Amused and indulgent (had they won the court house pool?), they told us that if we could find a week when neither judge was hearing cases and memoranda were under control, we not only could marry but could steal a week for a honeymoon.

We scoured the court calendar, and so it came to pass that on April 26, 1947, two law clerks married during term time, which had never happened before. We had a small, mostly family wedding. We planned it, and my mother came. Two weeks later, we had a large (for us) reception, attended by friends, our enabling judges and, of course, Marjorie “Matchmaker” Coleman. My mother must have managed that one—we were much too busy playing catch-up at work.

Carmel “Kim” Prashker Ebb, now 94, graduated first in her class at Columbia Law School, completing college and law school in five years. Her father, Louis Prashker, was a law professor and authority on New York civil procedure. Her brother, Herbert Prashker, clerked for U.S. Chief Justice Harlan Stone, and her husband, Lawrence Ebb, clerked for Supreme Court Justice Fred M. Vinson. Later, her mother, son and daughter became lawyers. From 1947 to 1990, Kim Ebb was an attorney at several federal agencies and two law firms—working part time from 1951 to 1972 as associate general counsel at a government agency, an associate editor for a BNA publication, and on complex labor arbitration and mediation while raising her family.