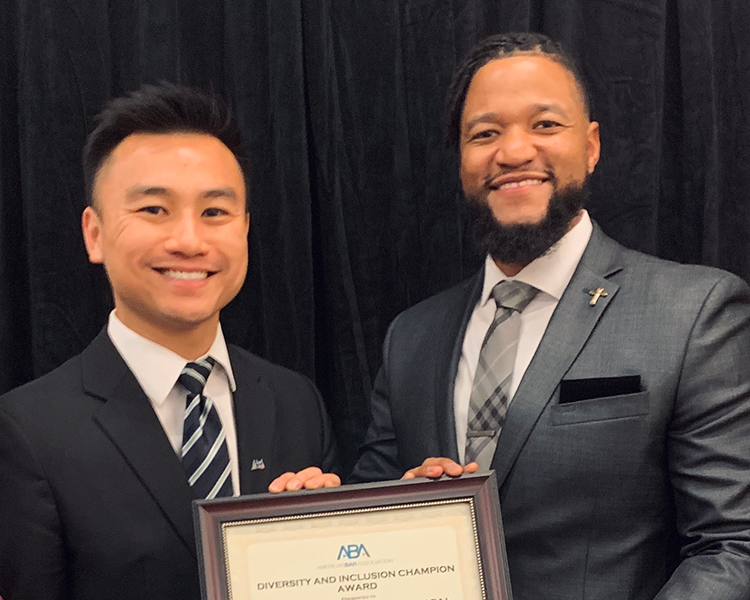 Michael Luong Nguyen (left) and Jerome Crawford accepted the first Diversity and Inclusion Champion Award on behalf of the Men of Color Project in February. Photo by Colleen Lamarre.

Amid the national reckoning over racial injustice, Jerome Crawford and Michael Luong Nguyen find themselves facing a unique opportunity.

They serve as co-chairs of the ABA’s Men of Color Project, an initiative within the Young Lawyers Division that aims to address the lack of diversity and advancement of men of color in the legal profession. Along with building future leaders, the project facilitates intergenerational support and encourages community service and civic engagement among members.

In recent months, Crawford and Nguyen realized the Men of Color Project could also play an important role in the ongoing conversation about racial equality and police reform.

“It came down to ‘How do we support this cause?’” Crawford says. “We recognized that we represent a unique constituency that needed to be spoken up for. The issues that we’re talking about disproportionately affect men in communities of color, particularly Black and brown men.”

They helped organize a virtual town hall meeting for Thursday and invited civil rights attorney Lee Merritt to be on the panel. Merritt represents the families of George Floyd, Ahmaud Arbery and Breonna Taylor, three unarmed Black Americans who were killed this year.

Michigan Lt. Gov. Garlin Gilchrist II, the head of a state task force addressing the disparate impact of COVID-19 on people of color, and Paul Henderson, the executive director of San Francisco’s Department of Police Accountability, will also participate on the panel.

In addition to the town hall, the Men of Color Project will release a video that highlights how men of color are disproportionately affected by racial injustice. Members of its leadership team will also share how they view their responsibilities as men of color and as attorneys.

“As Jerome has said, I feel very lucky to be involved with the Men of Color Project at a time like this where we do have this platform to educate, but then also with the town hall and the video, talk about what we can actually do going forward,” Nguyen says.

Nguyen and Crawford credit their parents for inspiring them to serve others. 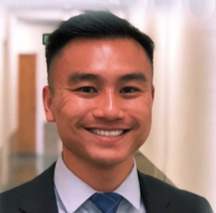 Nguyen’s mother was six months pregnant with him when she escaped Vietnam on a small boat. The boat landed in Malaysia, where he was born and lived in a refugee camp for two years before coming to the United States.

He thinks often about his parents’ experience settling into the San Francisco Bay Area and how it shaped him.

“We grew up poor, seeing my parents struggle on a daily basis to make ends meet and to survive for my brothers and I,” Nguyen says. “That has always given me the motivation to excel in school and ever since I can remember, I really cared about giving back and being involved in the community.”

Nguyen earned his bachelor’s degree in social anthropology from Harvard in 2009. After college, he worked with refugees and asylum seekers through Lawyers for Human Rights in South Africa. He went to the University of California, Hastings College of the Law thinking he wanted to be a human rights lawyer, but changed course after a summer externship with a judge who formerly worked as a prosecutor.

“I realized that prosecutors in the criminal justice system have this incredible role,” he says. “They are basically gatekeepers of the system. They are the ones making the key decisions on whether to charge or dismiss a case, who to charge and what the defendant’s sentence should be—and these are all important decisions that have a huge impact on the lives of people in the criminal justice system.”

After graduating from law school in 2013, Nguyen worked as an assistant district attorney in Santa Cruz and San Francisco counties and then as a deputy district attorney in nearby Alameda County. He left in the fall to explore other opportunities but considers possibly returning to prosecution.

“With everything that’s going on, I think it’s so important to have prosecutors with my background, someone with diverse perspective and experiences that understands and reflects the communities we serve,” he says. 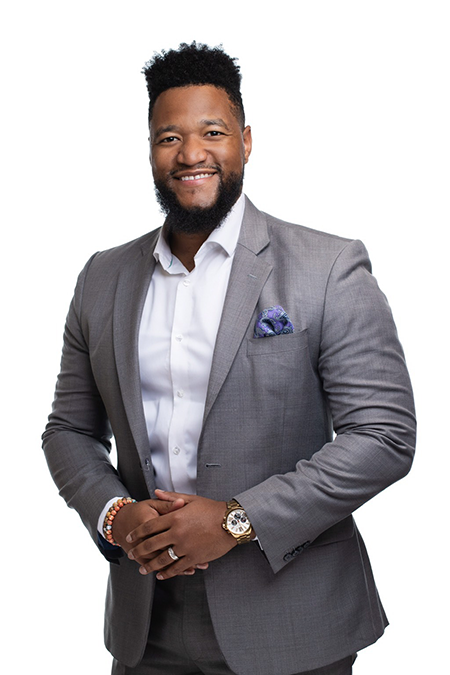 Crawford was born and raised in Detroit, a predominantly Black city with a high poverty rate. While his parents, whom he calls his “modern-day heroes,” made sure their family had everything it needed, he noticed the effects of inequities around him.

The way his father, who was a pastor and private investigator, responded made a huge impression on him.

“He was the neighborhood dad,” Crawford says. “So for a lot of my friends who didn’t have father figures as a role model, he served in that role for them. That instilled in me a spirit of service and giving back.”

In high school, Crawford was in drama club and wanted to be an actor. He didn’t think much about pursuing a legal career until a classmate drove a two-seater Mercedes Benz to school—an oddity for a Detroit teenager—and he discovered her father was an entertainment lawyer.

“My day job has kept me in this commercial world and gives me access to the places and spaces I probably never would be, as someone who looks like me with my background, but I make it a point to spend my free time and my volunteer time giving back in very specific ways,” says Crawford, who also acts and does stand-up comedy.

Crawford and Nguyen got involved with the ABA after being selected for the Young Lawyers Division’s Scholars Program, which encourages minority, solo, government, private sector and military attorneys to participate in conferences and other activities.

“The purpose of the program is to serve as a pipeline for diverse attorneys into YLD leadership, and that’s pretty much what happened,” Nguyen says. 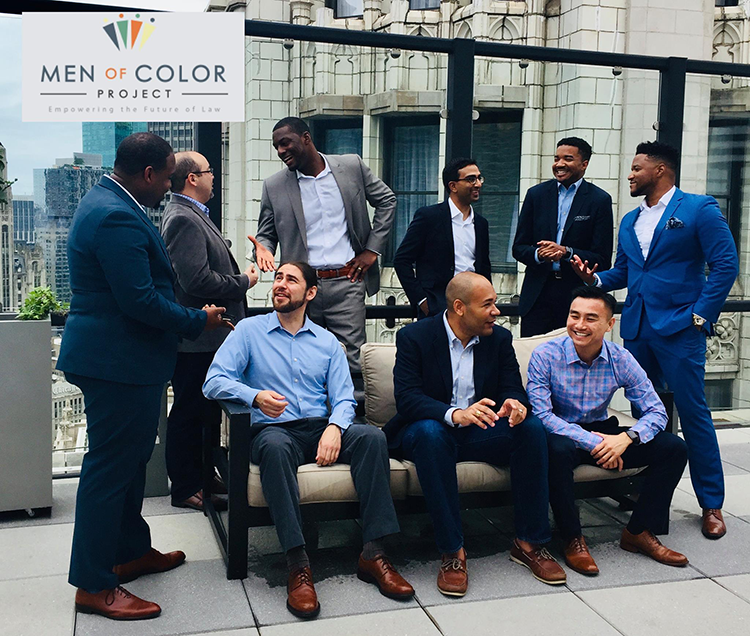 The team during a photoshoot at the start of the Men of Color Project in 2018. Michael Luong Nguyen is seated, far right. Jerome Crawford is standing, far right. Photo by Stephen Young.

They met as inaugural members of the Men of Color Project, which was launched in August 2018 by Tommy Preston, then-chair of the Young Lawyers Division. Nguyen had served as the division’s diversity and inclusion director and wanted to continue to help create a pathway to opportunities for others.

Crawford agreed, saying the mission of the project “hit home for us.”

“We were in a unique position because we had a man of color stepping into the chair role and it was part of his vision,” he says. “Upon being tapped, we felt the call and said absolutely.”

Crawford and Nguyen helped establish the project’s three pillars—vision development and execution, sponsorship and mentoring, and mental health and wellness—and organize its first summit, which drew more than 100 men to Washington, D.C., in May 2019.

As co-chairs, they accepted the first Diversity and Inclusion Champion Award on behalf of the Men of Color Project at the ABA Midyear Meeting in February.

They helped develop several webinars, including one in June that focused on embracing vulnerability as a leadership strength during times of crisis. In addition to organizing the July 16 town hall meeting, they recently co-moderated the first program in a five-part Young Lawyers Division series on equality and justice.

“We need to really think about how we can improve the lives of Americans, particularly African Americans, and where the profession fits into this national dialogue,” says Preston, who serves as a senior adviser to the Men of Color Project. “The project has an opportunity to be a force for change and an important part of moving these discussions forward.

“I can’t think of two people, particularly in this time in our country’s history, that can lead this group in the way that they have. It’s a testament to their extraordinary leadership and commitment to this work.”

After their term ends in August, Nguyen will stay on as a special adviser to the Men of Color Project and Crawford will continue to serve as the District 20 (Michigan) representative to the Young Lawyers Division. He is also running in a contested election to be its next secretary.