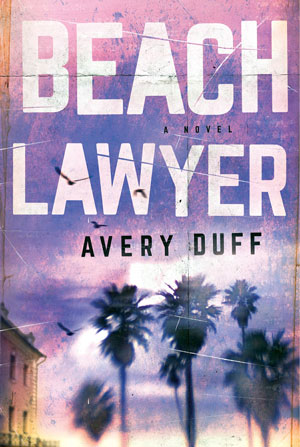 You know after a breakup when your family tells you “the right one will come along?” You begrudgingly take their advice with the proverbial grain of salt because even though they’ve been out of the game for God knows how long, they’re still together and seem happy enough.

Then one day, a new person does come along. Love hits you like a ton of bricks, and you realize they were right the entire time. Likewise, I can thankfully tell you there are books still being written which you cannot put down.

Beach Lawyer, the tale of a California attorney’s fall from almost making partner to being a fired, reputation-ravaged man out for revenge, is just that kind of a read. If you’ve missed the likes of the classic mystery novelist John D. MacDonald and his colorful salvage consultant, Travis McGee, who lives on a boat known as the Busted Flush, then you might just find solace in reading Avery Duff’s Beach Lawyer about attorney Robert Worth.

I recently received an offer from the Kindle app on my iPhone: “Pick one of these four books to read for FREE! Courtesy of KindleFirst.” It seemed too good to be true, but I couldn’t argue with “FREE!” so I downloaded the app to select my prize. Of the four tomes, I had a natural inclination toward one in particular, but I saw another with ‘lawyer’ in the title and knew this should be it. I wasn’t disappointed.

Despite the sleeper title, Beach Lawyer begins with a staccato rhythm relentlessly rendered for several chapters and almost the entire book. It is un-put-downable, and that’s not a word. Later, I may also start a sentence with a preposition. Stay tuned.

And this is the measure by which many good works of fiction wind up with prestigious prizes. I had yet to witness it in the wild myself, but the first four chapters of Beach Lawyer read remarkably similar to winning novels I’ve seen. For the first three-quarters of the book, I was up late each night reading, debating on whether sleep was still my first priority. The only reason why I could more easily put it down before the ending is because the tension was so high, I needed the break.

If the devil is truly in the details, then he has a vacation home next door to the Beach Lawyer. A good attorney knows the specifics of the case. A better one knows which ones to ignore. What attorneys-turned-authors rarely realize is relaying too many facts really drags down an otherwise strong story. Not so with Beach Lawyer! The author, Avery Duff delivers the “deets” judiciously, from intricate character descriptions and case details to merely the use of one word (such as brand name as adjective) and lets the reader’s mind fill in the blanks.

For those of you who like a fairy-tale ending, you’ll find one midway through the book. Fortunately, for the rest of us, there are several more chapters still to go. In fact, Beach Lawyer takes some very unexpected twists and turns of an adult nature which might have the more innocuous of bookworms asking themselves: “What the heck am I reading?”

I have to admit I was one of them. Main character Robert Worth and his colleagues are initially so upstanding and likable that learning of any sinful indulgence feels like some sort of a betrayal. A few more readers on Amazon and KindleFirst were critical of the book if for only this reason, but perhaps it’s also because they didn’t like how they felt about themselves after continuing to read it as a sudden guilty pleasure.

It’s important to keep in mind that while this is Duff’s first novel, he’s a former law firm partner who is now a successful screenwriter. Once you understand this, you’ll better see why the book leads you where it does: to a place perfect for adaptation for film or television. It’s also a specifically themed and quasi-quixotic beach read, a genre which is perhaps more often salacious than your typical whodunit. In fact, because Beach Lawyer is so obviously targeting its audience as a beach read for lawyers or would-be lawyers, I spent time wondering if the title was more daft than clever. So stay the course when reading, for all is not as it seems.

Robert Worth is a veritable Boy Scout. Everything he does is above board and by the book … at least at first. In spite of being a goody-two-shoes, he’s not too much of one. Worth quickly becomes a likable character for his acute observations on life as well as his ability to befriend and appreciate almost everyone. Almost. With every brick author Duff places in Worth’s ivory tower, the reader comes ever closer to a wrecking ball dismantling nearly everything Worth strove so hard to achieve. But just like in Lincoln Logs or Jenga, picking up the pieces after Worth’s sudden destruction is half the fun.

Beach read aspects aside, the serial nature to the novel belies it as a great work of fiction except for one thing. There’s an assurance we are to get another. And if you’d like a modern day window into what it might be like as a young lawyer on track for junior partner at a prominent firm, the first half of Beach Lawyer is for you.