What martial arts training can do for lawyers (podcast) 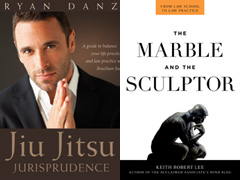 In the spirit of New Year’s resolutions, many attorneys have vowed to become more physically active. Attorney-authors Ryan Danz and Keith Robert Lee both say that martial arts training is particularly beneficial to lawyers, and they explain to the ABA Journal’s Lee Rawles exactly why.

In Danz’s book, Jiu Jitsu Jurisprudence, he discusses how learning Brazilian jiujitsu not only had benefits for his body but taught him mental techniques he is able to use in his practice of law. Lee, author The Marble and the Sculptor, agrees. “In looking at it from the outside, someone who’s really never done martial arts, it probably looks to be primarily a physical activity,” Lee says. “I think anyone who’s done martial arts for any significant amount of time will tell you it’s equally a mental activity.”

In addition to providing stress release, Danz and Lee both concur that one of the benefits to be gained from martial arts is a certain humbling of one’s ego. “It’s important to get your ego checked and check yourself, and to know that you’re not always the best at everything,” Lee says. “It kind of brings you down and it humbles you, and makes you kind of look at things differently, and I think that’s a really valuable thing that can come from training in martial arts.”

Since graduating from law school in 2004, Ryan Danz has gone on to an in-house counsel position at a New York City-based hedge fund, reached the final four of The Apprentice: Martha Stewart, opened his own financial services company that handles more than $6.5 billion in assets under management, and raced around the world on The Amazing Race. In his free time, he trains and competes in Brazilian jiujitsu. He lives in San Diego.

Keith Robert Lee practices law at the Hamer Law Group in Birmingham, Ala., where he lives with his wife Charlene and their son, Aidan. He received his undergraduate degree from the University of Alabama at Birmingham and his JD from the Birmingham School of Law where he started the legal blog Associate’s Mind. He has a second-degree black belt in Yoshinkan aikido and has studied Russian sambo and Brazilian jiujitsu.