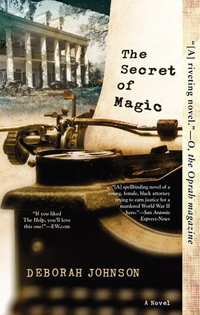 The Secret of Magic is a book within a book. It is both the title of Deborah Johnson’s 2015 Harper Lee Prize for Legal Fiction-winning novel, and (in the world of that novel) a reclusive writer’s scandalous 1920s children’s book, which dared to feature black and white playmates solving mysteries together in a magical forest.

The protagonist of The Secret of Magic, Regina Robichard, is a young black lawyer in 1946, working for Thurgood Marshall and the NAACP Legal Defense Fund. Raised in the north, Regina travels to Mississippi for the first time to investigate the mysterious death of a returning World War II veteran. She discovers that she has been summoned by the reclusive author M. P. Calhoun, a white woman who wrote a single inflammatory book—The Secret of Magic—and has never published again. What Regina uncovers in the small southern town of Revere is a morass of conflicting social and racial ties, in which the real mystery is not who killed the young black soldier—but whether justice of any type will be possible to achieve by legal means.

Author Deborah Johnson joined the ABA Journal’s Lee Rawles to discuss the personal experiences which led her to write this book; the historical influences she drew upon; her thoughts on winning the Harper Lee Prize; and her opinion of Harper Lee’s To Kill a Mockingbird and Go Set a Watchman.

Rawles was a member of the selection committee which narrowed down the three nominees for the 2015 Harper Lee Prize. The prize was awarded to Johnson in a ceremony at the Library of Congress in Washington, D.C., in September. Find out more about the Harper Lee Prize for Legal Fiction here. 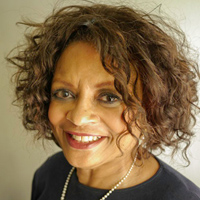 Deborah Johnson grew up in Omaha, Nebraska. After college, she lived in San Francisco and then for many years in Rome, where she worked as a translator and editor of doctoral theses and at Vatican Radio.

Johnson is the author of The Air Between Us, which received the Mississippi Library Association Award for fiction, and The Secret of Magic, which was awarded the 2015 Harper Lee Prize for Legal Fiction. She now lives in Columbus, Mississippi, where she is working on her third novel.