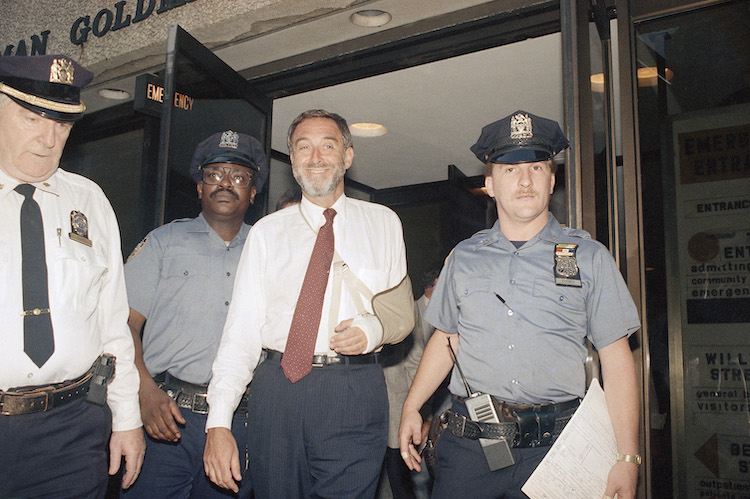 Attorney Barry Slotnick, who successfully defended subway gunman Bernhard Goetz in court, is flanked by two policemen as he leaves a New York hospital in July 1987, after being treated for injuries sustained when he was beaten by a bat-wielding mugger. Photo by Joe Landau/The Associated Press.

James Patterson, long known as a master of make-believe, took on nonfiction a few years ago. So he may be more qualified than anyone to confirm one of the oldest adages in the book: Truth is stranger than fiction.

“I don’t know that it was always that way,” the bestselling author in the world tells me. “But lately, it certainly seems that way.” He adds: “Whatever the hell they write in fiction, nobody could say, ‘Well, that could never happen.’”

Patterson need not look far to make his point. His latest foray into real-life comes next week (Dec. 20) with the release of The Defense Lawyer. The book tells the story of Barry Slotnick, the New York City criminal defense attorney who achieved renown for securing acquittal after acquittal in some of Gotham’s highest-profile cases. Slotnick even had a dozen-year stretch in which he didn’t lose a case.

“A guy couldn’t be as successful as he is, Patterson says. “Well, yep, they could.”

Slotnick, 82, is best known for his successful representation of Bernhard Goetz, a white man charged with the mid-1980s shooting of four Black teens on a New York subway car. Slotnick also played a major role in securing not guilty verdicts for organized crime boss John Gotti and six co-defendants following a nearly seven-month-long racketeering trial in a Brooklyn federal court.

Though Slotnick was once called the best criminal lawyer in the country by American Lawyer, his name isn’t recognized by today’s generation. What made Patterson, whose world is an oyster for topics, choose Slotnick?

“Defense lawyers are interesting anyway,” the 74-year-old author tells me during a phone interview from his Palm Beach, Florida home. “The idea that he went … 12 years without losing is pretty stunning.”

And despite the fact that Slotnick’s cases are decades old, Patterson isn’t concerned that his new title—co-authored with Benjamin Wallace—will suffer. “A good story is a good story,” he says.

Patterson also points to the public’s fascination with criminal trials on cable news. He says legal proceedings satisfy a human desire because they lead to an ending. “They want to know what happened. One of the things about trials is that there’s always a resolution. It may not be what you want. But there it is.”

With 425 million books in print, Patterson, unsurprisingly, sees trials through a familiar lens: “What’s the story that that jury needs to hear and believe? Why is my story better than the other guy’s story or other [woman’s]?” 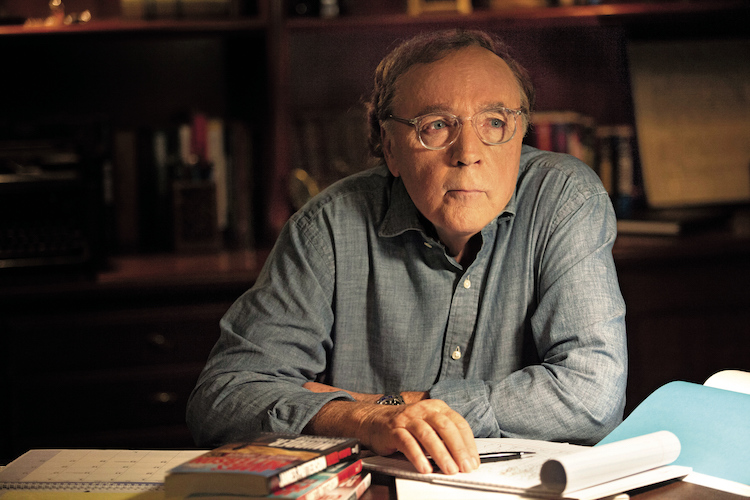 Slotnick—these days retired and living in Boca Raton, Florida—took an express train to the profession. Having skipped some grades as a youngster, the Bronx native graduated from New York University School of Law at age 20. He had to wait to turn 21 to take the New York bar exam.

After being sworn in, Slotnick immediately headed to lower Manhattan to set up a phone number, answering service and maildrop near the courthouse. As he got out of the cab, the minutes-old lawyer scribbled his mother’s phone number on a piece of paper and gave it to the driver, offering his services if the need arose. The cabbie’s son, after being charged with DUI and hit and run, would become his first client.

Slotnick’s career trajectory began in 1966 with his representation of Joe Colombo, the reputed boss of New York City’s Profaci crime family. Colombo had been subpoenaed to testify before a grand jury. Colombo, impressed with Slotnick’s work that day, hired him to become the wise-guy’s go-to lawyer. Slotnick soon after successfully represented him before the U.S. Supreme Court on a double jeopardy issue.

Once in with Colombo, Slotnick, despite his youth, was now in the brotherhood for organized crime figures in need of representation.

The Defense Lawyer is one story after another of Slotnick’s abracadabra to keep his clients out of prison. Patterson tells me that one of his favorite tales involves Vincent “Chin” Gigante, then a soldier in the Genovese crime family, who risked losing his beloved German shepherd, Bullets. The canine had sunk its teeth into someone. Because this was his third biting incident, Gigante’s best friend faced being euthanized.

At a hearing, Slotnick was given permission to leave the courtroom. He took Bullets and returned a moment later with two more German shepherds. Slotnick asked the victim to identify which of the three dogs bit her. They looked identical and she couldn’t. The People v. Bullets, as Slotnick called the case, was dismissed.

Three days before Christmas in 1984, Bernhard Goetz, while riding on a New York City subway car, believed that he was about to be mugged. The 37-year-old Goetz, who had been robbed previously, pulled a gun and shot four teens, paralyzing one. He claimed he fired in self-defense.

The case polarized the city. To those fed up with crime run rampant, Goetz was a hero and dubbed the “Subway Vigilante.” Others saw it differently: The teens were simply messing with Goetz and had no intention of robbing him. His fear was the product of racism.

Slotnick’s biggest challenge was his client. After the shooting, Goetz fled to New Hampshire, where he turned himself into police nine days later. He gave three confessions—written, audio and video—containing statements that made self-defense a tall order. Slotnick’s task was to debunk his client’s confessions.

Goetz was acquitted of all charges except a weapons offense, for which he served eight months. Slotnick’s defense centered around Goetz’s perception of the situation, based on his prior attack, the nature of the teens’ actions toward him and the cramped space of the subway car. Slotnick persuaded the judge to allow the jurors to visit the type of subway car in which the shooting occurred. It was an older model and more confining that the newer ones to which the jury may have been accustomed. 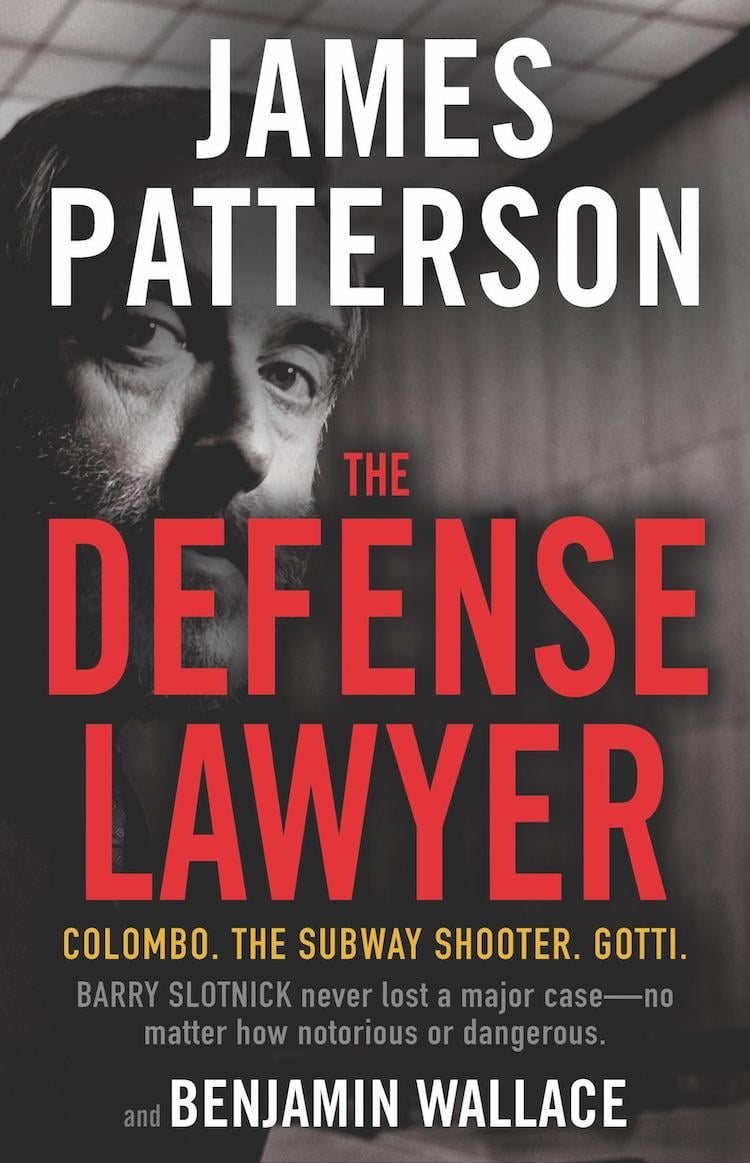 A bit of Forrest Gump

In addition to Slotnick’s many courtroom theatrics, Patterson also describes a Forrest Gump-type nature of his career. Representing an ousted Dominican Republic official, Slotnick sat across from then-President John F. Kennedy in his suite at New York’s Carlyle hotel to discuss U.S. policy toward the country after a military coup. The president was assassinated one week later.

And in another incident involving Colombo, the gangster, upset with what he viewed as Italian American slurs in the media, persuaded the producer of the movie The Godfather to remove objectionable language from the script, including all references to “the mafia.” After that, there were no more unexplained broken cameras or missing production equipment on the set. The task of marking up the film’s script fell to Slotnick.

Before marrying Melania Knauss in 2005, Donald Trump knew she needed a well-regarded lawyer to make sure their pre-nuptial agreement would stick. The future president sent his fiancee to Slotnick.

With a pace as swift as the best legal thrillers, Patterson’s slew of stories in The Defense Lawyer reveal Slotnick’s secret sauce. But for lawyers looking to try it, it can’t be bottled. The core ingredient making Slotnick king of the hill was an optimism that every case was winnable. From there, he combined breathtakingly creative tactics, highly effective cross-examination and a skilled former New York City detective as his investigator. Slotnick also believed no issue was too unimportant and no advantage too small.

Patterson recounts that during one trial, Slotnick noticed a juror wearing a piece of jewelry with a foreign-language inscription. He had it translated. It was a term of affection, and Slotnick worked it into his closing.

Slotnick’s sartorial trademark, custom-made three-piece Italian suits, were worn unapologetically—and practically. “The prosecutor, in his rumpled seersucker, comes across as the poor civil servant who’s doing this for the love of justice,” the couture-sporting lawyer says in Patterson’s biography. “But if I come in decked out in my polyester special, the jury will know it’s a ploy. The worst thing you can do is lie to a jury—verbally, emotionally or visually. If you do that, you’re gone.”

Describing a basis for his father’s success, Slotnick’s son, Stuart Slotnick, a shareholder at Buchanan Ingersoll & Rooney and head of the firm’s New York City office, tells me: “He liked winning. He was never competitive in the ways you see people competitive in sports, but when it came to this, he wanted to win.”

This winning, the younger Slotnick says, created a misconception about his father: “I think people perceived my dad to be a ‘killer’ because he won so much. He was not a ‘killer’ in the way people thought. He wasn’t a yeller or threatener. He was a ‘killer’ because he was smart, worked hard, got the angle and knew what he needed to do to win. People met my father and were surprised to find him to be low-key and quiet.”

Patterson’s enthusiasm for his forthcoming work is unmistakable. “I’m a sucker for this stuff,” he says about trials. “I read Grisham novels.”