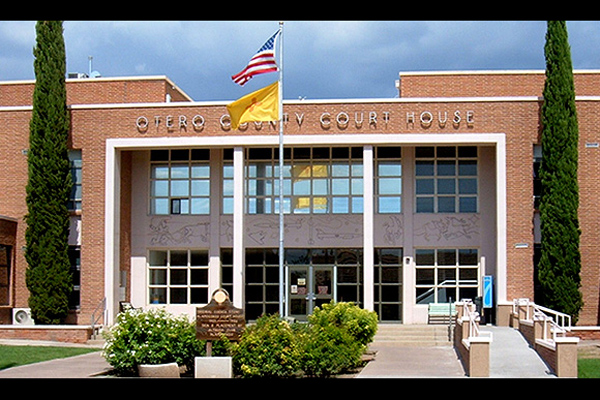 Some employees believe a ghost is responsible for unexplained activity at the Otero County Courthouse in Alamogordo, New Mexico.

Some report seeing a ghost wearing a suit from the early 1900s, doors closing on their own, and items falling to the ground for no reason, KRQE News 13 reports. The falling items—a donation jar and a bowl on the X-ray machine—were captured on surveillance video, according to the broadcast station.

One employee says she didn’t see anything—but she felt someone pulling on her hair while in a courthouse restroom. No one else was there.

Maintenance man Kenneth Shaffer told the broadcast station that he has witnessed strange occurrences. “We would prop the doors open and all the sudden the doors will shut right behind you, slam shut, or you walk through the courtroom and you get a cold chill that runs right through you,” he said.

According to the South Eastern New Mexico Economic Development District, the current courthouse building was completed in 1956, and was built to replace an earlier courthouse constructed from 1901-1903. One of the theories reported to KRQE was that a man who committed suicide in the 1960s or 1970s was haunting the building.

Attribution: Image from the 12th Judicial District of New Mexico