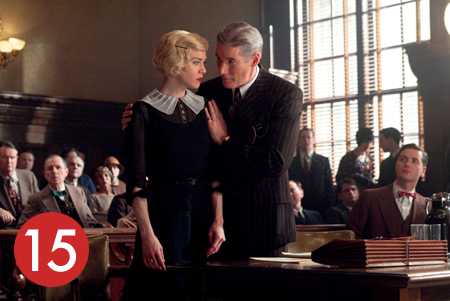 Lawyers tap-dance all the time, but Richard Gere does so pretty darn well as sleazeball attorney Billy Flynn in the film adaptation of the highly successful Bob Fosse musical. Catherine Zeta-Jones and Renee Zellweger play celebrity murderers who cynically parlay their Jazz Age notoriety into a vaudeville act.

Maurine Dallas Watkins’ original play, Chicago, or Play Ball, produced as a silent film by Cecil B. DeMille in 1927 (and later, the 1942 Ginger Rogers vehicle Roxie Hart), is based on two actual murder trials she covered as a reporter for the Chicago Tribune.