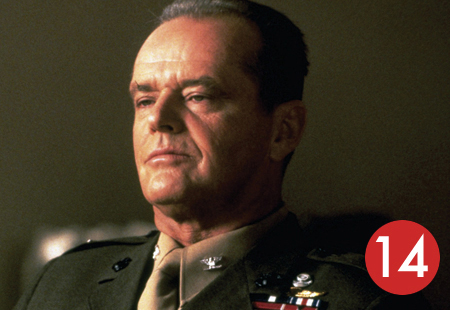 Say what you will about Tom Cruise, but he is high-octane as a re­luctant Navy JAG litigator in Rob Reiner’s suspenseful film iteration of this military courtroom drama by Aaron Sorkin (creator of The West Wing). Two low-ranking Marines from the Guantanamo Bay naval base are being court-martialed for the death of anoth­er, allegedly part of an unofficial pun­ishment known as a “code red.”

The Marines say they were following orders. Their unapologetic commander, Col. Nathan Jessup (an absolutely electric Jack Nicholson) says they acted on their own. The truth, if you can handle it, turns out to be something more complicated than a sense of duty—but some­times, exactly that.

Trivia: Sorkin based his original play on a military case prosecuted by David Iglesias, later U.S. Attorney for New Mexico.