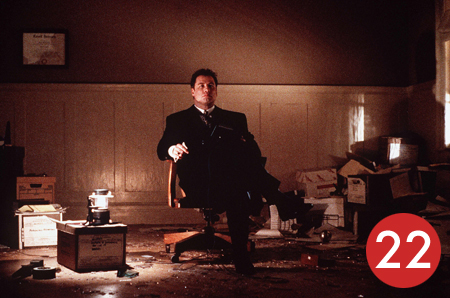 On its surface, this is a David vs. Goliath: Small-firm Boston plaintiffs lawyers up against two conglomerates whose tannery, they’ve decided, is responsible for the leukemia-related deaths of eight children. At its core, however, this is a grown-up thriller about the perilous practical consequences of demanding moral outcomes from a legal action better suited to risk-and-reward.

John Travolta is earnest as Jan Schlicht­mann, the firm’s senior partner whose outrage drives the firm into a war of at­trition against a better-funded foe. Robert Duvall is adroit as the quirky Jerome Facher, a corporate lawyer whose experience predicts Schlichtmann’s every naive move.

Best lawyer line goes to Facher: “Pride has lost more cases than lousy evidence, idiot witnesses and a hanging judge all put together. There is absolutely no place in a courtroom for pride.”