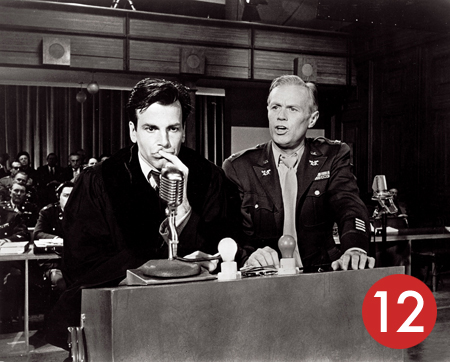 Stanley Kramer directed this searing portrayal of the Nazi war crimes trials set in 1948. The Abby Mann script focuses, in particular, on charges brought against four German judges who are accused of allowing their courts to become accomplices to Nazi atrocities.

An American judge, Dan Haywood (Spencer Tracy), finds himself trying to understand how these once-esteemed colleagues allowed themselves to be used. He gets little or no help from average Germans, who are busy distancing themselves from Germany’s Nazi past.

When one of the judges, Ernst Janning (Burt Lancaster), breaks from the others and confesses, it becomes clear that—whatever their original intentions—these judges have chosen political obligations over their personal senses of right and wrong.

Trivia: Won two Oscars. Marlene Dietrich, who personally experienced the Nazi regime, was allowed to write many of her own lines.