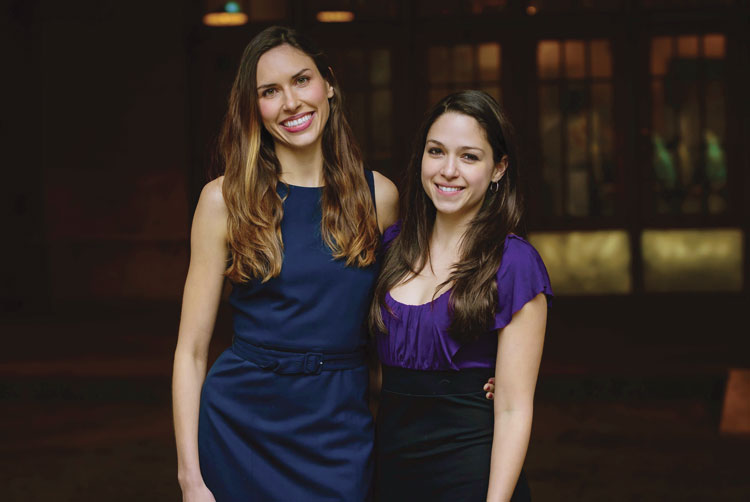 Photo of Felicity Conrad and Kristen Sonday courtesy of Paladin


But rather than focusing on the festivities, they spent most of the evening talking about a pro bono asylum case Conrad had recently won for a South American man and how technology could amplify social justice.

Conrad, 28, had recently left an associate position with Skadden, Arps, Slate, Meagher & Flom, where she practiced international litigation and arbitration. Sonday, 30, had spent about three years as an international affairs specialist with the Department of Justice, assisting with writing international arrest warrants and coordinating the extradition of fugitives.

“I was working at the time at a hedge fund and was itching to get back in a startup. I had just wrapped up my role at Grouper,” says Sonday, referring to an app that paired groups of friends for drinks. Sonday previously worked as its director of international operations.

This year, the two launched Paladin, a platform that helps organizations manage, staff and track pro bono efforts. Lawyers create an online profile with their legal interests and skills, as well as availability, and Paladin regularly sends the user a list of potential pro bono cases. They also can search through a database of existing opportunities.

Once representation begins, Paladin tracks data on the case, which it shares with the lawyer’s employer in a way that excludes identifying information. At this point, in-house counsels mostly use Paladin.

“Our platform makes sure that the right attorneys are seeing the right opportunities,” says Conrad, a 2013 graduate of New York University School of Law and the company’s CEO.

And their service was among 12 legal startups selected to compete at the 2017 ABA Techshow.

“One of the really nice things about the application is that you can indicate that you have a knowledge base,” says Bradick, a 2012 ABA Journal Legal Rebel. “When we have pro bono attorneys say ‘I know housing law, and I like to help people in housing,’ we get better pro bono representation.”

Employers pay a subscription fee, based on the numbers of employees they have, to use Paladin. (Its initial funding came from private investors.) The service started in New York City, Baltimore, San Francisco and Chicago and is now available across the country, says Sonday, a 2009 Princeton University graduate and Paladin’s chief operating officer.

“Learning about the nuances related to pro bono has been fascinating to me,” says Sonday, mentioning things like the wide range of cases available and philanthropic considerations for companies.

“It’s taken a year to really get a good grasp on the ecosystem, and now we’re realizing why this has never been done before. You have to rely on local people,” she adds. “For me, it’s been humbling that there’s so much detail that goes into each and every pro bono case.”

The business has a partnership with NYU School of Law for students and alumni, and it also works with law students at the University of Baltimore. In January, when lawyers went to airports to help people detained following President Donald Trump’s travel ban, Paladin sent out information to its e-mail discussion list and had staff on the ground at both O’Hare and John F. Kennedy international airports.

During that time, Sonday says, Paladin members grew from 50 to more than 1,500.

“Lawyers feel that sometimes it would take a lot of productivity on their part to find cases they were excited about, but this was a real-world example of lawyers wanting to know how to get involved,” Conrad says. “It was really cool for us to help them with that.”