These days, it seems as if Google tracks absolutely everything about everyone. In fact, if you Google “Google tracks everything,” you get about 37 million results. So it might be shocking to learn that, within the last decade, Google’s ability to track data stopped at its own doorstep—or at least at the front door of its legal department.

Mary Shen O’Carroll remembers that when she took over Google’s legal department in 2008, she was surprised to learn it was, essentially, in the dark when it came to data and analytics.

“Running an in-house legal department was worldly different than running a law firm,” says O’Carroll, 40, who joined Google after five years at Orrick, Herrington & Sutcliffe, where she served as profitability analysis manager. “Law firms track everything and know what everything costs. They have very good data and analytics. On the other hand, we had very little to no data on the legal department side. We had no visibility on what we were spending.”

O’Carroll’s first task was to figure out what Google spent on its outside counsel. She soon learned that was the largest and quickest-growing part of her budget. 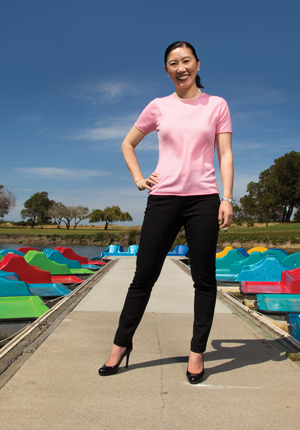 Some of her changes involved putting in basic processes like having standard engagement letters and billing guidelines, items she calls “low-hanging fruit.” She also wanted a mechanism that would allow her department to capture structured data, so she instituted Google’s Outside Counsel Dashboard. The dashboard allows Google lawyers to see real-time information relating to their outside counsel spending, and it includes an e-billing system that allows O’Carroll and her team to review invoices and figure out how much they spend and how much they should be spending.

With those things in place, O’Carroll then looked to expand the scope of her team. For that, she looked outside the legal realm, recruiting individuals with experience in knowledge management and information technology. She wanted to make her legal department run more efficiently, thereby allowing the lawyers to handle higher-value work.

“It took a long time to become this fairly mature legal department compared to others,” says O’Carroll. “But I think we’ve succeeded and even paved the way for others after us.”

O’Carroll is passionate about collaboration, both within Google and among the legal department field. “The entire industry needs to progress, and we can’t do that with just a few of us at the forefront,” she says. She sits on the leadership team of the Corporate Legal Operations Consortium, an organization that brings together legal operations professionals to exchange ideas that range from best practices to innovation. “We need everyone to get there together.”

She also has three young daughters (ages 6, 3 and 1) to raise. “Obviously, they take up most of my free time,” she says.

As Susan Hackett, CEO at Legal Executive Leadership, points out, collaboration like the consortium advocates for isn’t a hallmark of lawyers generally.

“Mary believes in the power of teams to exponentially multiply results delivered,” Hackett says, “so she’s spent a significant amount of time helping them to leverage that power by driving communication, collaboration and engagement strategies throughout the department.”

Google, by its very nature, forces O’Carroll to stay ahead of the curve—a job she has excelled at. “Google thrives by leading and staying out front—by creating and defining the market ahead of everyone else,” Hackett says. “So that’s the challenge that Mary and her legal teams have to live up to, too; it’s Mary’s job to prepare and equip Google’s lawyers to see around corners and to look for ways to advance the company’s business as part of the executive team.”

In that vein, O’Carroll says a major part of her focus in the future will be on moving the needle toward value-based billing. She plans on advocating for legal departments to get to a more “mature state” the way Google’s did so that, together, they can change the way legal services are delivered.